County Kerry to invite President Trump to the Kingdom

Some Irish think Donald Trump would like their golf courses, other want him to stay away. 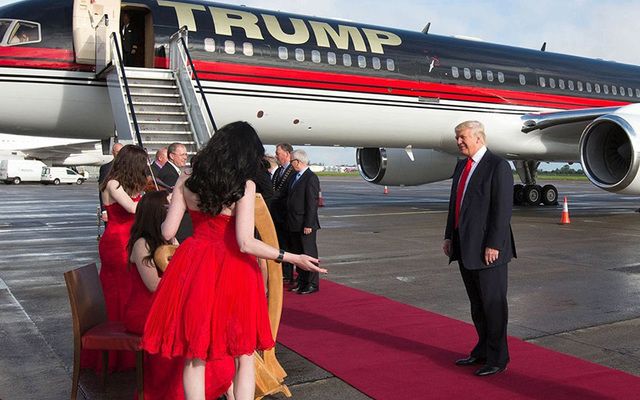 That time, back in 2014, when Ireland's Minister for Finance literally rolled out the red carpet for Donald Trump when he arrived at Shannon Airport. RTE.

Irish councillors will extend an invite to President Trump to visit County Kerry when he gets the chance.

Councillor Tom McEllistrim from the Fianna Fáil party proposed that the Council send the 45th President a letter of congratulations on behalf of the people of Kerry and, subject to his treatment of undocumented Irish people in the US, ask him to visit the Kingdom when he gets the chance.

In proposing his motion, McEllistrim said that a visit by a sitting US President could shine global attention on Kerry in a similar way that Kennedy and Obama’s visits to New Ross, Wexford and Moneygall, Offaly did for those places.

Whilst the motion passed it was not without opposition; when McEllistrim first proposed the motion in December it proved to controversial he withdrew it “in the interest in peace.” In the same meeting the council unanimously backed a similar motion asking for Pope Francis to visit Kerry when he comes to Ireland in 2018.

The Christmas season behind him, McEllistrim reintroduced his motion, citing the Kingdom’s world renowned golf courses as a good reason for Trump to visit the tourist hot spot.

"Obviously, I think there would be huge economic benefits in the visit of the president and he wouldn't be the first. President Bill Clinton previously played golf in Ballybunion," the Irish Independent reported him saying.

"The publicity it would get would put Kerry on the map and also from a tourism point of view, it would enhance our tourist numbers.

"The priority is Kerry and it's from a Kerry perspective I'm putting down the motion and I think it would be good for business, jobs and tourism and it would also be good for the undocumented Irish."

Independent Councillor Donal Grady from Killarney said he was against Trump visiting Kerry “full stop” because of his past treatment of women.

Cllr Tom McEllistrim is proposing that @countykerry "invite @realDonaldTrump to Kerry". Would you like to see Mr Trump come to the Kingdom?

County Kerry was the fourth most visited of Irish counties in 2015 and tourists spent a sizeable quarter of a billion dollars whilst on vacation there. It’s expected that after the filming of Star Wars in the county that visitor numbers will increase significantly this summer, so if he does visit, President Trump will find he’s certainly not the only American visitor in town.