Who are the Irish allies for immigration reform in the Trump era?

Will budget director nominee Mick Mulvaney or Senate minority leader Chuck Schumer be the loudest voice for the Irish over the next four years? 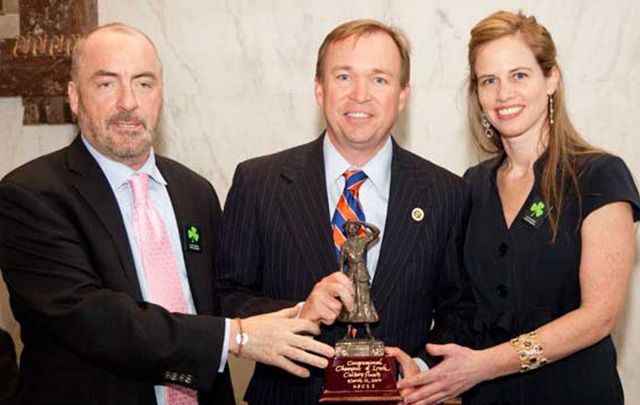 Thirty-one years ago the Reagan administration moved boldly to fix the nation’s broken immigration system with the 1986 Immigration Reform and Control Act.

The legislation had significant effects, not least the spurring of a national campaign on behalf of undocumented Irish immigrants to secure legal status in a United States that was much less of an open door to Ireland since the enactment of an earlier reform act in 1965.

The ’86 measure included an amnesty provision, but most of the “80s Irish” arrived in the U.S. after the amnesty cutoff date.

The result was the birth of the Irish Immigration Reform Movement and a campaign for green cards that witnessed the naissance of the Donnelly, Morrison and Berman visa programs, as well as a diversity visa provision that would be associated with then congressman, and later senator, Charles Schumer.

Schumer’s name would be front and center in congressional efforts to reform immigration law in subsequent years, and his name will be prominent again in the new 115th Congress.

But in what capacity?

Will the new Senate Democratic Leader be a crafter of legislation that will bring relief to the plight of the undocumented and the so-called “Dreamers” - those who were brought at very early ages to America by parents who lacked legal status?

Or will Schumer be leading a rearguard action against efforts by a combined Trump administration and Republican-controlled Congress to not only put even more pressure on the undocumented and illegal but also to curb legal immigration?

Will Schumer be an Irish ally in the upcoming administration?

Not a few incoming Capitol Hill legislators would like to see restrictions on even legal immigration, and more than a few are lining up to make life even more difficult for the undocumented (those who arrived legally in the U.S. but overstayed) and illegal (those who arrived in the U.S. without a visitor, or temporary visa, that was checked at a point of entry).

But, as is always the case, the Irish can count on some Congress members as being sympathetic, or at least less than harsh.

And in some cases, they can count on members who could be described as friends - even be they friends on opposite sides of the political fence.

"Congressman Mulvaney has been a great friend of ours since he arrived on Capitol Hill in 2010.

We look forward to working with him,” said ILIR Chairman Ciaran Staunton.

“Working with him” depends on Senate confirmation and in a twist with a tinge of irony - at least in an immigration context - Senator John McCain – the Republican half of the McCain/Kennedy reform bill of a decade ago – has stated that he is leaning against voting for Representative Mulvaney.

ILIR is bipartisan in its outreach, so any member of the House or Senate is seen as a friend if his or her view on greater legal access to the U.S. for the Irish – and/or the lifting of the three and ten years bars that keep the undocumented Irish fenced in - is deemed positive.

In this regard, House Speaker Paul Ryan is a friend of the ILIR, and indeed, in recent days, Ryan has sought to pour balm on waters troubled by immigration pronouncements made by President Trump during the campaign.

Ryan has a hurley stick in his Capitol Hill office that was presented to him by ILIR’s Ciaran Staunton. 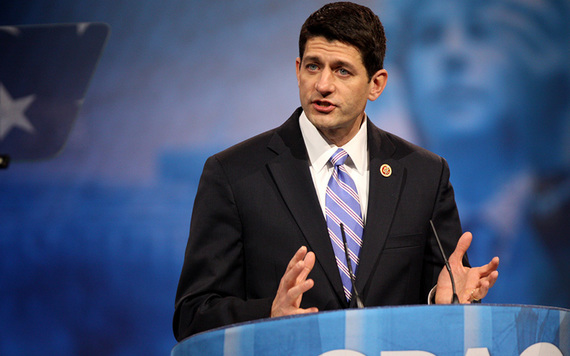 Congressman Mulvaney might be getting one too for his new office should he be confirmed as budget director, or to give the job its full formal title, Director of the Office of Management and Budget.

But in one of those political twists that abound on Capitol Hill, Senator Charles Schumer - arguably Washington’s greatest champion of immigration relief for the Irish since the death of Senator Edward Kennedy in 2009 - has problems with the Mulvaney nomination.

CNN reported that Schumer has floated the possibility that Republicans should block Rep. Mick Mulvaney from the budget post over his failure to pay taxes on a household employee, comparing it to a scandal that sunk President Obama's initial Health and Human Services pick.

"If Tom Daschle couldn't become a cabinet member for not paying taxes for a household employee, then the same standard ought to apply for Mick Mulvaney," Schumer told reporters.

As CNN further reported: “Mulvaney said he has since paid the $15,000 in taxes as well as penalties and the Trump team dismissed criticism noting the congressman has already taken ‘appropriate follow-up measures.’”

Daschle withdrew his 2009 nomination amid reports that he had failed to pay nearly $130,000 in taxes.

His subsequent retirement from national politics was a blow to Irish immigration campaigners as the onetime Senate Majority Leader had been a strong supporter of reform.

Indeed, back in 2004, Daschle was the prime Democratic sponsor of a reform bill along with then Republican Senator Chuck Hagel of Nebraska.

If it is the case then that Irish reformers need every possible friend on Capitol Hill, they will be hoping that Senator Schumer, now the Senate Minority Leader, grumbles and growls over Congressman Mulvaney, but leaves it at that.

That said, Mulvaney, a father of triplets, is a fiscal hawk rooted in the Tea Party and a founding member of the House Freedom Caucus.

Schumer might feel inclined to go beyond mere growling. 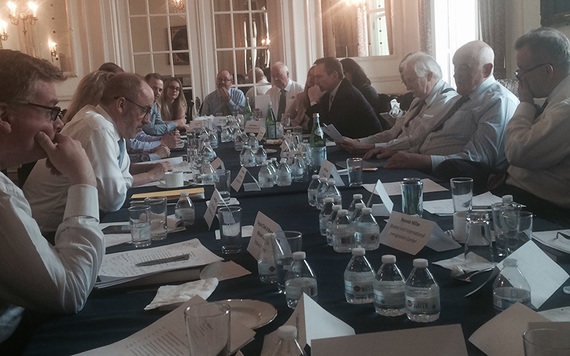 Just a few days before President Trump was inaugurated, Ireland’s ambassador to the United States, Anne Anderson, hosted a gathering at the Irish embassy in Washington, D.C. of Irish organizations working on behalf of the undocumented Irish and for immigration reform. Irish Embassy photo.

Thus far, President Trump’s most obvious stances on immigration have been focused on building a wall along the border with Mexico and deporting illegal immigrants who are convicted of crimes in the United States, a process that is carried out on a regular basis anyway.

Today, Mr. Trump sets about signing executive orders aimed at constructing a wall along the border with Mexico, restricting the inflow of refugees, and reducing the numbers of immigrants from some Muslim majority countries.

These moves are based on repeatedly proclaimed campaign promises.

Beyond these executive orders, the new president’s deeper and more detailed feelings on the immigration issue could well emerge into sharper relief when it comes to dealing with DACA.

The acronym denotes the relief granted young people under the Deferred Action for Childhood Arrivals program.

Last week, hundreds of religious, civil rights, ethnic and immigrant rights organizations who work on behalf of immigrants and their families signed on to a letter urging President Trump to protect the more than 740,000 individuals who are currently covered by DACA.

In the letter, according to a release, 863 national, state and local organizations said that DACA “has become one of our nation’s most successful immigration policy initiatives...fostering economic growth and strengthening national security.”

The letter asked Trump to continue DACA, despite his campaign promises to immediately end all of President Obama’s executive actions on immigration.

.@Ciaran_Staunton urges Undocumented Irish living in the US not to make “any rash decisions” @ILIR_Tweets https://t.co/GENZHkctHs

Added the release announcing the letter: “There has historically been bipartisan support for protection from deportation for the population which benefits under DACA.

“In June 2012, President Obama announced DACA as an initiative to provide work permits and relief from deportation to young adults and children who arrived in the United States before the age of 16. Applicants must submit to background checks, pay a fee, and meet certain educational requirements.

“Besides enabling them to increasingly contribute to the economy, DACA has made it easier for those immigrants to attend college and to join the military.

“However, DACA remains limited in that it offers no pathway to permanent legal immigration status or citizenship.”

A few, though not many, who come under the DACA umbrella are Irish.

Since his inauguration last Friday, President Trump has been signing executive orders at a rate that would, in other times, have brought howls of “imperial presidency” raining down upon the White House.

But it is the seemingly mercurial nature of the 45th president that gives Irish reform advocates cause for continued hope, even when prospects for comprehensive reform look bleaker than they have done for years.