Gerry Adams and the President had a bet going about whether there would be a deal. 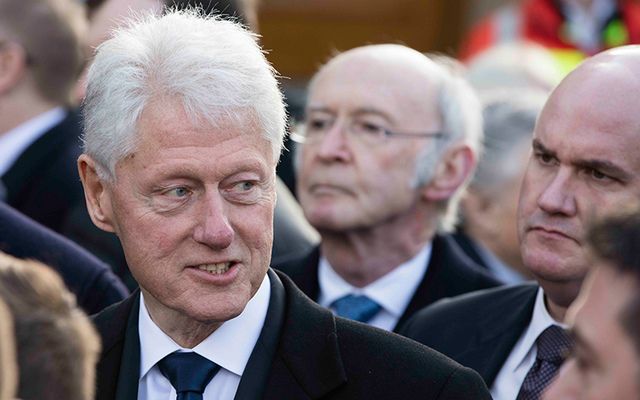 Bill Clinton told political leaders in Northern Ireland that they could wake him up in the middle of the night if needed.

The revelations comes after the Bill Clinton Presidential Library released transcripts of phone calls relating to his work in Ireland to the Irish Times.

In June 1999 - a year after the Good Friday Agreement had been signed - Ulster Unionist Party (UUP) leader, David Trimble, was feeling the pressure and was letting off steam to President Clinton.

“You guys can wake me up in the middle of the night,” the President told him, “if you think of anything I can do or say that will either help you with your own people by showing the United States will give you the high ground by completely disavowing the other side if they don’t keep their word, or if you can think of anything I can do to persuade Sinn Féin to come closer to you. I will do that. I know what position you are in.”

“I will try not to disturb your sleep,” Trimble told Clinton appreciatively, “but I thank you very much for this call.”

The President also spoke by phone to Sinn Féin leader Gerry Adams  about whether Trimble would go for a deal.

“I think he is going to do it. I’ll bet you a dollar he goes for it,” Adams opined.

“That is a dollar I would love to pay off,” the President quipped.

“It sounds silly and I couldn’t say to him like I can to you, but we’ll make sure he’s okay,” Adams countered. “I look forward to taking your money.”

Bill Clinton sheds a tear at the site of the Omagh bombing in 1998. Image: RollingNews.ie.

The archives do not mention if Clinton ever paid up.

Afterward the White House connects Clinton to Trimble and the President bluntly tells the UUP leader, “Personally, if they screw us on this, I will support kicking them out and stand up publicly and say that you are not to blame and they are.”

In 2000, Sinn Féin and Gerry Adams were taking flack for when the IRA dragged their heels over decommissioning of weapons.

David Trimble, Clinton told Adams, “has eaten a lot more than the IRA has. He’s eaten his

words four or five times and then he just found a way to get out of it and survive.”

After the Ulster Unionist Party members approved power sharing in principle following the IRA’s decommissioning of weapons, Clinton called the UUP leader to congratulate him in gushing tones.

“You were brilliant,” the President enthused. “They may have to give you a second Nobel peace prize.”

“The weird thing about politics is that sometimes you have to take more grief from your friends than your enemies,” Clinton mused.