Christmas international travel could be disrupted by Covid, say officials

Chief Medical Officer has warned the Irish government about the high incidence rate of COVID-19 and expressed concerns over the future trajectory of the virus. 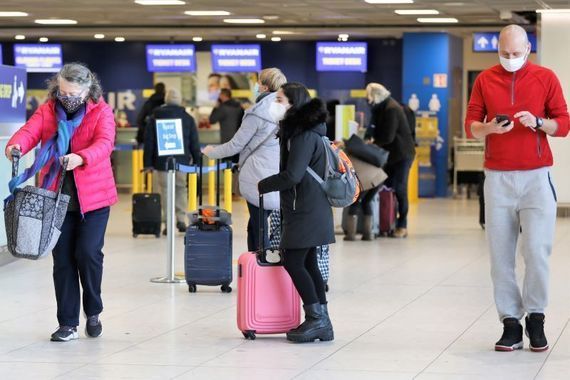 Ireland could face restrictions on non-essential travel over the Christmas period due to the threat of the omicron variant, according to reports.

The Irish Times reports that Chief Medical Officer Dr. Tony Holohan warned the Irish Government about the high incidence rate of COVID-19 at present. He also expressed concerns over the future trajectory of the virus.

Holohan met with senior government officials on Wednesday and did not present any new modeling on the omicron variant, while he also did not indicate whether the National Public Health Emergency Team (NPHET) would be recommending new restrictions.

However, senior government figures have told the Irish Times that there is a threat of new restrictions for non-essential travel over Christmas, with the omicron variant believed to be in Ireland in "significant numbers".

The Irish Times reports that government officials are also concerned that the omicron situation in Britain could be mirrored in Ireland after British Health Secretary Sajid Javid warned that there could be up to one million omicron infections in Britain by the end of the month.

Holohan reportedly expressed concerns over the spread of the new variant in the UK and other European countries.

However, Pfizer has announced that the booster dose of its COVID-19 vaccine offers significant protection against the omicron variant.

Meanwhile, children between five and 11 could receive their first dose of the vaccine before Christmas after the HSE stepped up efforts to roll out the vaccine to the age group after the National Immunisation Advisory Committee (NIAC) approved its use.

Children with underlying health conditions or who live with siblings with complex medical issues or a person who is immunocompromised could receive the first dose of the vaccine before Christmas, while a more general rollout of the vaccine is expected to begin in January.

The HSE expects to receive the first doses of the Pfizer children's vaccine, which is roughly one-third of the strength of an adult vaccine, from the EU next week.

Tanáiste Leo Varadkar said on Wednesday that health officials remain in the dark about the omicron variant, adding that the variant appears to be more transmissible but less dangerous than other variants.

He said that a second booster - or fourth vaccine dose - may be required because evidence from Israel showed that immunity continues to wane even after the first booster dose.

"It may well be the case that this is a vaccine that particularly people with medical conditions might have to have on an annual basis like we do with the flu," Varadkar said.