British soldiers accused of crimes during Troubles to be given amnesty

British ministers are set to introduce a statute of limitations so that no soldier can be charged for their involvement in incidents that took place before the Good Friday Agreement in 1998. 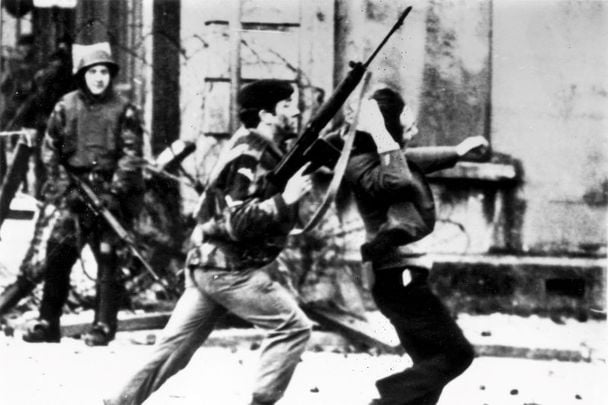 Politicians in Ireland and Northern Ireland have condemned a reported move by the British Government that will prevent former British soldiers from being prosecuted for their actions during the Troubles.

The Times and the Telegraph report that British ministers are set to introduce a statute of limitations so that no one can be charged for their involvement in any incidents that took place before the Good Friday Agreement in 1998.

The ban on prosecutions will apply to soldiers and paramilitaries alike, but there will be an exception for any cases involving war crimes, genocide, or torture.

Parts of the reported move could be detailed in the Queen's Speech next week and would signal the scrapping of the 2014 Stormont House Agreement, which pledged to establish a £150 million unit of investigation for all unsolved killings during the Troubles.

The British Government will instead implement a Nelson Mandela-style truth and reconciliation process, which will encourage those on all sides of the conflict to come forward without risk of prosecution. A newly-established legacy commission will then use that information to give families closure.

Sinn Féin Vice President Michelle O'Neill took to Twitter to condemn the reported move, stating that the plan to give amnesty to former soldiers was "a slap in the face" for victims of the Troubles.

"Another cynical move that will put British forces beyond the law. This is legal protection for those involved in state murder. This is not acceptable," O'Neill wrote on Twitter.

Another cynical move that will put British forces beyond the law. This is legal protection for those involved in state murder.

This is not acceptable.

Irish Minister for Foreign Affairs Simon Coveney also expressed concerns over the reported move and advised the British Government against taking unilateral action over the issue.

"The Irish Government discussed with our UK colleagues the commitments of the Stormont House Agreement and strongly advised against any unilateral action on such sensitive issues," Coveney said in a statement.

"We reiterated that only through a collective approach can we deal with these issues comprehensively and fairly in a way that responds to the needs of victims, survivors, and society as a whole. Victims and their families are the only priority."

Coveney met with Northern Ireland Secretary Brandon Lewis on Wednesday, but it is understood that he wasn't informed of the proposed statute of limitations.

Meanwhile, SDLP leader Colum Eastwood described the reported move as "a betrayal" of the victims of the Troubles.

"If true, this will be the biggest betrayal of victims by the British government & will put a huge obstacle in the way of true reconciliation. This is the most unprincipled & cynical British government in many years and that’s saying something. An absolute disgrace. Shame on them," Eastwood said in a tweet.

If the British government bring an amnesty for British soldiers and paramilitaries then it will be a massive betrayal of victims who have had to fight every day for justice. Peace can only be built on truth and justice for everyone. pic.twitter.com/EAEG3pxnDv

"This kind of briefing, before any meaningful engagement with victims’ families, typifies the contempt with which Govt are treating victims," said on Twitter.

"I believe that they deserve justice where that is possible: however, at the very least, they deserve not to learn of Govt plans on Twitter."

The British Government has denied that it is giving amnesty to former soldiers with the proposals even though no prosecutions will be brought against soldiers even in cases where new evidence is brought to light.

The new proposals come two days after two former paratroopers were acquitted of the murder of Official IRA leader Joe McCann in 1972. The soldiers' trial at the Belfast Crown Court collapsed after Mr. Justice O'Hara excluded statements given by ex-soldiers because they were inadmissible in court.

Prosecutors in Northern Ireland are currently examining seven other cases against former British soldiers. These cases are unlikely to be affected by the statute of limitations.

British soldiers are believed to be responsible for at least 301 of the 3,520 deaths that took place during the Troubles.