Britain's Brexit “shambles” has been imposed on Ireland and Europe by a “self-regarding and imperially-minded English elite,” Fianna Fail leader Micheal Martin said. 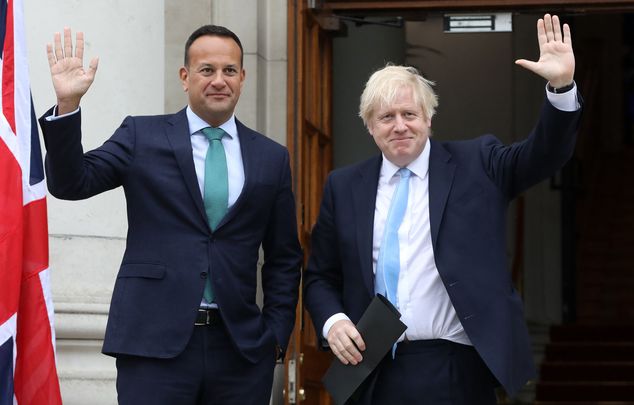 As Britain once again struggles to deliver Brexit, the “shambles” surrounding it has been imposed on Ireland and Europe by a “self-regarding and imperially-minded English elite,” Fianna Fail leader Micheal Martin said.

He said Brexit – Britain’s impending departure from the European Union - was based on a “narrow nationalism which has a history of delivering short-term highs and long-term misery.”

As leader of the largest opposition party in the Republic, Martin has generally been supportive of the Fine Gael-led government’s approach to dealing with Brexit which this week faced new hurdles after MPs sitting at Westminster on Saturday narrowly rejected the immediate acceptance of last week’s exit deal finally agreed between the EU and the U.K.

Instead, they voted at a special Saturday sitting by 322 to 306 for an amendment to withhold approval of British Prime Minister Boris Johnson’s deal until it has been passed into law.

Although the exit deal was agreed between the EU and the U.K., it cannot come into force until it is approved by both the British and EU parliaments.

Under recent legislation introduced during the Brexit process, Johnson sent a request to the EU requesting an extension of the October 31 date on which the U.K. is set to leave.

However, he refused to sign the letter and sent EU leaders a photocopy of the text instead. He then phoned key powerbrokers to make clear that they should ignore his Parliament’s request for more time.

Despite the extension request – and further confusion when Westminster House Speaker John Bercow refused to allow another debate on the Brexit deal on Monday, citing parliamentary convention dating back to 1604 -- the British government continued to insist that it will leave the EU by the end of the month.
Hardline Brexiteer Cabinet Minister Michael Gove said, “We are going to leave by October 31. We have the means and the ability to do so.”

Instead of a new debate on the Brexit deal, Westminster on Monday set about introducing what’s called the Withdrawal Agreement Bill, called the WAB. That has to undergo full parliamentary scrutiny in both the Commons and the Lords before it is passed.

Johnson’s government set three days aside to force all aspects of it through the Commons before it moves to the Lords on Thursday.

If the British government cannot get the WAB through Parliament, the default legal position is for the U.K. to leave without a deal on 31 October, but that will change if the EU grants the extension reluctantly requested by Johnson.

From an Irish perspective, the deal agreed between the EU and the UK
ditches the backstop, the controversial “insurance policy” designed to prevent a return to physical checks on the Irish border.

Instead, it will as predicted here last week, draw a new customs border in the Irish Sea.

EU sources have said a special plenary session could be convened next week to ratify the deal before the October 31 deadline if Westminster approves the agreement in the coming days.

Irish government sources have said there is some confidence in Downing Street that Johnson can secure parliamentary approval for the agreement, despite the defeat on a related amendment last Saturday.

An Irish government source observed: “All eyes on Westminster -- again