EU’s Brexit negotiator Maroš Šefčovič said there was almost no difference between the United Kingdom's demand for no customs checks and the EU’s offer of minimum checks. 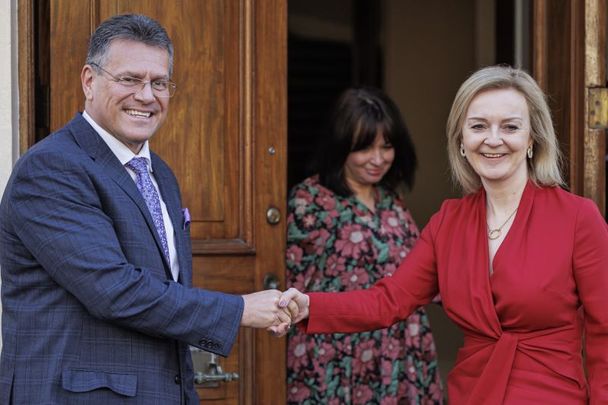 A chink of light has appeared in the Protocol arrangement that has seriously dampened trade relations between Britain and Ireland and the European Union.

The EU’s chief negotiator on Brexit Maroš Šefčovič said there was almost no difference between the United Kingdom's demand for no customs checks and the EU’s offer of minimum checks.

He suggested customs checks on “a couple of lorries a day” on ferries between Britain and Northern Ireland could be enough to satisfy any suspicions of illegal smuggling or illicit drugs cargos.

Taoiseach Micheál Martin said on Monday that Šefčovič was demonstrating “flexibility” and a “desire to be solution-driven” in proposing ideas on resolving the Northern Ireland protocol issue.

Šefčovič's proposal was unlikely to have been discussed by Martin and new UK Prime Minister Liz Truss when they met at a service of reflection for Queen Elizabeth on Tuesday afternoon at St. Anne’s Cathedral in Belfast. Truss is the lead mourner for British people before the Queen is buried next week.

Following a statement last week from Truss on the prospect of a negotiated settlement on the Northern Ireland Protocol, Šefčovič said the EU stands ready to work in an “open and constructive way” with Britain.

The hint of a breakthrough came as the UK and EU are embroiled in a row over Britain’s proposals to override parts of the controversial post-Brexit Protocol which is designed to reduce trade barriers and ensure a safe border in Ireland. Currently, Britain plans to scrap most of the Protocol arrangements.

But in a Financial Times interview, Šefčovič said he was “encouraged” by Truss’ recent negotiation remarks.

He argued that the trade border would be “invisible” under the EU’s plans, with goods processed “remotely” while making their way to Northern Ireland, as long as the UK provides real-time data on their movements.

Šefčovič suggested physical checks would typically only be made on a “couple of lorries a day” when “there is reasonable suspicion of illegal trade smuggling, illegal drugs or dangerous toys or poisoned food.”

The Protocol has proved deeply unpopular with unionists because it has introduced new trade barriers in the Irish Sea. It has sparked a power-sharing crisis at Stormont, with the DUP withdrawing from the administrating Executive in protest.