A string of high-profile Democratic figures have been mailed explosive devices this week in an attempted terror attack. 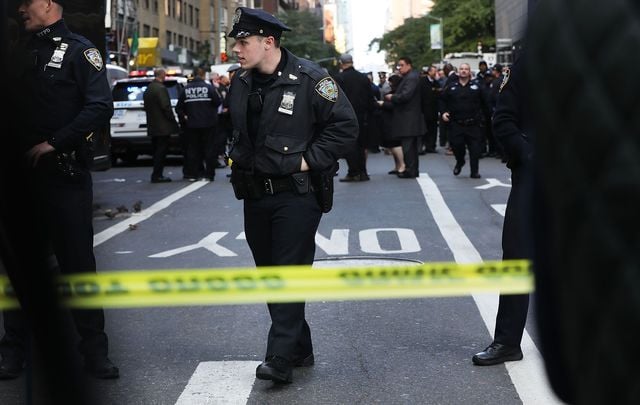 Several explosive devices, intended for Democratic political figures, including the Irish American former head of the CIA John Brennan, have been intercepted in locations around the US before they could cause any damage.

Bill and Hillary Clinton, the Obama family, George Soros, and John Brennan were all mailed packages this week that included crude explosive devices.

The situation at the Time Warner Center was clearly an act of terror attempting to undermine our free press and intimidate New Yorkers. But the people of this city have shown time and again that they stand up in the face of terror.

At the press conference, the Governor of New York Andrew Cuomo said a suspicious package was also sent to his New York City office and it was being investigated.

The packages, which were all intercepted before reaching their intended recipient, included pipe-bomb style explosives that were “rudimentary” yet “functional.”

New York City’s Time Warner Center, home of a CNN bureau, received a package on Wednesday morning that prompted a massive evacuation out of “an abundance of caution.”

The package received there, which included an explosive and an envelope of white powder, was reportedly addressed to John Brennan, former head of the CIA. The package was reportedly delivered by courier, not by regular mail.

The package intercepted at Time Warner Center in NYC

Brennan, a critic of President Trump, is a contributor to MSNBC and a frequent guest on CNN. This summer, Brennan famously had his security clearance revoked by US President Donald Trump.

On Wednesday, President Trump tweeted that he agrees “wholeheartedly” with Vice President Mike Pence’s condemnation of the string of attempted attacks.

On Wednesday afternoon, the President hosted a live press conference where he said that such terrorist attacks have no place in America.

President Trump on suspicious packages: “In these times we have to unify, we have to come together and send one very clear, strong, unmistakable message that acts or threats of political violence of any kind have no place in the United States of America.” https://t.co/BmgkJ2qaIE pic.twitter.com/7MnJeKBeMn

Elsewhere, the Secret Service intercepted packages nearby to both the Clinton home in Chappaqua, New York and the Obama home in Washington, DC.

They added that the Clintons and the Obamas “did not receive the packages nor were they at risk of receiving them."

Hillary Clinton responded to the thwarted threat on television while in Florida:

Hillary Clinton praises the Secret Service for their response to a bomb threat on her residence in Westchester County, New York, adding that we live in a "troubling time... of deep divisions." https://t.co/4R1BQuBNPf pic.twitter.com/hwiI31pbzi

In Maryland, a package was intercepted on Wednesday at the screening location that processes mail for the U.S. House of Representatives. The intended recipient for that package is said to be Representative Maxine Waters.

In Florida also on Wednesday, the office of Debbie Wasserman Schultz, the former chairwoman of the Democratic National Committee, was evacuated after a potentially dangerous package was delivered there.

On Monday, Democratic supporter and billionaire George Soros reportedly had a package left in his mailbox at his Bedford, New York home.

Sources are saying the mailings appear to be linked. They come just two weeks before the midterm elections in the U.S.