An Irish man has been filmed heckling Boris Johnson in Leeds and accusing the Prime Minister of "playing games" ahead of Brexit. 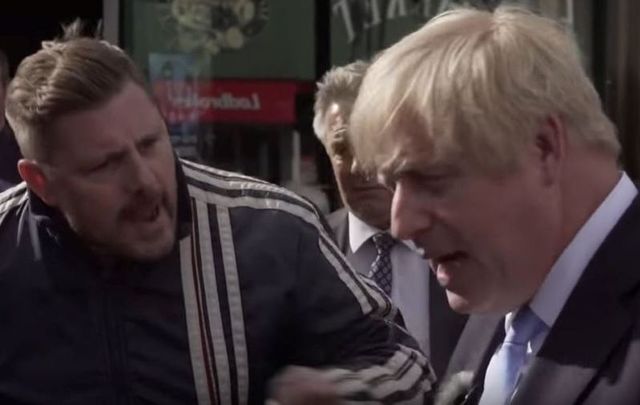 An Irish man has accused Boris Johnson of "playing games" ahead of Brexit BBC, YouTube

A man who is understood to be Irish was filmed berating Prime Minister Boris Johnson for his management of Brexit in Leeds on Friday.

The video, which is quickly becoming viral, was captured and shared by BBC News on Friday, September 6.

In it, the unnamed man, who has a Dublin accent, accuses Prime Minister Boris Johnson of “playing games” as Brexit draws closer with no deal in place.

"We are on the verge of getting a deal," Johnson says.

A reporter later asks Johnson how he will bring the country together.

"The only way to do that is to get Brexit done on October the 31st and take the country forward and that's what I think the people want to see."

As Johnson was speaking with the reporter, a separate bystander clearly holds up a bag that read "Nuttier than a Fruitcake."

You can watch the entire exchange from BBC here:

What do you make of the Irish man's comments? Let us know in the comments, below