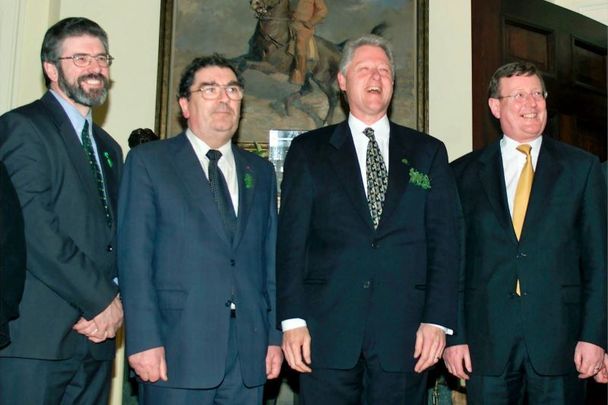 David Trimble was a key architect of the Good Friday Agreement that brought peace to Northern Ireland almost a quarter of a century ago, an effort that made him a Nobel Peace Prize winner.

Tributes from across the world have poured in following his death at the age of 77 on Monday, July 25 following a short illness.

President Bill Clinton said he and his wife Hillary were “deeply saddened” by Trimble’s death, saying his “lifetime of service helped bring peace to Northern Ireland.”

Clinton said in a statement, “His faith in the democratic process allowed him to stand up to strong opposition in his own community, persuade them of the merits of compromise, and share power with his former adversaries.

"His legacy will endure in all who are living better lives because of him today.”

“Hillary and I are deeply saddened by the passing of Lord David Trimble, a leader of courage, vision, and principle whose lifetime of service helped bring peace to Northern Ireland. His legacy will endure in all who are living better lives because of him today.”-Pres @BillClinton pic.twitter.com/cMZojayg1B

Two other leaders who were also architects of the agreement that brought peace to Northern Ireland, former Taoiseach Bertie Ahern and former British Prime Minister Tony Blair, were among many who joined the tributes.

Ahern said Trimble was courageous and that although they had “many a row, many arguments,” they were able to laugh about that in later years.

Ahern told the BBC, “We got on very well. Of course, we fought, of course, we had differences and some of them were fiery. There’s no use saying they were not. But we always kept negotiating and dealing with the issues in front of us.”

Blair said Trimble's contribution to the peace process was “immense.”

“It was a masterclass in leadership. He saw the chance of being able to settle the issue on terms that were acceptable to unionism. He was never in any doubt that he was going to be accused of betrayal. He paid the political price for that,” Blair said. 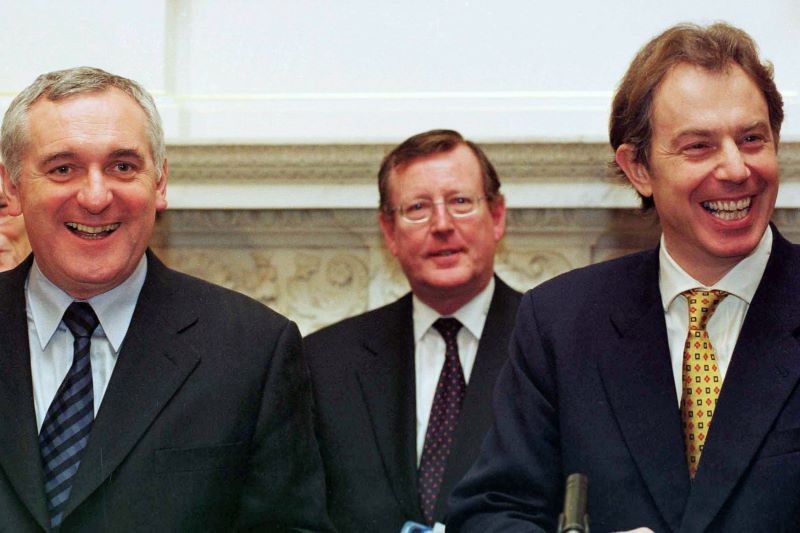 Trimble’s reward for the peace deal was the loss of his Westminster seat in 2005, and his Ulster Unionist Party’s support collapsed, prompting him to resign as party leader.

Trimble, who became a baron when he was given a seat in the House of Lords in 2006 – although he was seldom called Lord Trimble – won the Nobel Peace Prize in 1998, together with the late leader of the nationalist SDLP John Hume.

He called the Good Friday Agreement, which marks its 25th anniversary next April, “the greatest thing in my life.” The accord ended three decades of conflict in Northern Ireland by the IRA fighting to oust British rule and loyalist gunmen battling to keep the region part of the U.K.

Statement on the death of David Trimble pic.twitter.com/B6VqZhf7eA

Trimble started out in politics as a hardliner with the small loyalist Vanguard party in the 1970s but his career took off after he was elected to Westminster for the Ulster Unionist Party in 1990. He gained prominence leading the controversial Drumcree parade by the loyalist Orange Order in 1995. After clashes in previous years, the parade went ahead after a tense stand-off, and Trimble joined hands in the air with the then Democratic Unionist Party leader Ian Paisley in what some saw as a triumphant gesture.

In contrast, three years later he joined Deputy First Minister Seamus Mallon of the SDLP on a walk through the village of Poyntzpass when both visited the families of two friends, one a Catholic, the other a Protestant, who were murdered by loyalist paramilitaries.

Trimble had roots in the Irish Republic. His paternal grandfather, George David Trimble, was born in 1874 in Co Longford and joined the Royal Irish Constabulary in 1895 serving in Sligo, Armagh, Belfast, and Tyrone, eventually settling in Belfast and attaining the rank of head constable.

Trimble had a number of Catholic friends in Bangor, Co Down, where he was born, including the future RTÉ presenter, the late Derek Davis.

His primary love was music. He was an opera lover and also an Elvis Presley devotee, an interest he shared with Ahern.