The Irish experience in dealing with the Roe v. Wade thinking is instructive. Forty years ago, abortion was illegal in Ireland and how did that work out? 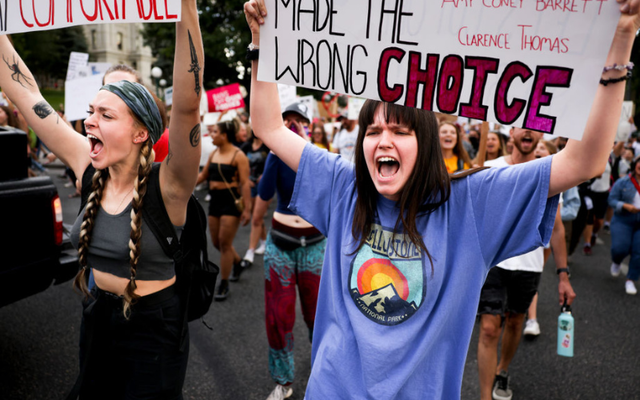 Casey Bryson participates in a protest against the Supreme Court's decision to overturn Roe v. Wade on June 24, 2022, in Denver, Colorado Getty

The 1973 Roe v. Wade decision by the Supreme Court impacted the lives of tens of millions of Americans.

It asserted a constitutional right to privacy allowing every woman to choose whether or not to continue her pregnancy.  No government body at any level could interfere with her preference in this regard.

For 50 years that right was accepted, and in poll after poll it was validated by a majority of Americans.  Compelling a woman to have a baby runs counter to a sense of decency and should be beyond the powers of church or state.

Abortion rights activists are re-grouping to present a united front against the recent staggering move by the Roberts Supreme Court to remove what was accepted for so long as a fundamental right.  At least two of the justices that voted for this massive change had assured senators during their public confirmation hearings that they fully respected the Roe decision as settled precedent.

Some 13 states have trigger laws which allowed them to ban abortion immediately after the expected ruling was handed down. By nightfall on the day of the announcement, June 24, every woman in Kentucky and Arkansas had lost the right to end her pregnancy – with no exception for incest or rape.

Hardline pro-life legislators in Missouri feel they have a strong wind at their back, buoyed by a firm conviction that a divine hand is leading them out of what they call the Roe depravity.  They are determined to find ways to prevent women from beating the system by going to another state for the termination procedure.

The reversal of Roe more than any other policy debate highlights the depth of division in the country.  Around 65 percent of people oppose the current outright ban, and Donald Trump, with his ear to the ground among his own supporters, warned that this issue could seriously hurt Republicans in the mid-term elections in November.

The pro-life community speaks of the Roe reversal as a game changer setting a new standard in the area of reproductive rights.  The doyens of the right cringe like the rest of us at fetuses conceived as a result of rape or incest, but in their oft-stated opinion, nothing justifies interfering with the natural movement towards birth.

This garbled thinking springs from the belief that we are dealing with problems that are amenable to law-book solutions. It represents the conservative approach while the progressive outlook claims that nullifying Roe will not significantly affect the number of pregnancy terminations in the United States.

The Irish experience in dealing with this issue is instructive. Forty years ago, abortion was illegal in Ireland and none of the political parties was calling for change.

However, a group of devout pro-lifers, backed by the full power of the then-ebullient Catholic church, warned that the Roe v. Wade thinking could seep into Ireland and judges might find a clause in the Constitution that would allow the hated “A” word to become part of the culture.

A 1983 referendum, based entirely on their fears of wayward judges, was carried by a two to one vote after a campaign where the spokesmen for constitutional change promised it would effectively rule out abortion in Ireland forever.  It was all sewn up legally, including the guarantee that the courts would be obliged to use the Irish language wording in the event of any legal argument.

How did it work out? We had the poignant story of a 14-year-old girl, known as the X case, who was prevented from going abroad for a termination because of the constitutional ban, and there were other similar “extreme” cases.

Nobody doubts the sincerity of the people who walked on the high moral ground in the 1983 referendum, but they were completely wrong in thinking that some constitutional wording could compel a woman who doesn’t want to have a baby to continue her pregnancy.

An estimated 180,000 Irish women went to England for terminations during the 35 years after the 1983 referendum. Clearly, the new words did not have the promised effect on female reproductive behavior.

In 2018, in another plebiscite, Irish people by approximately the same margin that carried the referendum in 1983 inserted a constitutional right to pregnancy termination in Ireland. This allows a woman to avail of abortion services in a professional setting in her own country.

And those celebrating the current right wing Supreme Court decision should beware of a similar fate here. A 10-year old in Ohio was raped and found to be pregnant.

Ohio Governor Mike DeWine deplored the grotesque savagery of this awful act, but the post-Roe law prevented him from intervening. Luckily, a doctor in Indiana agreed to provide the needed service while warning that new laws proposed in her state may preclude her from similar action the next time.

There will be an exodus of pregnant females to hospitals in blue states.  Actually, many won’t have to leave home because 54 percent of abortions now are medical, involving a regimen of pills for a few days. These tablets are suitable for termination up to 11 weeks and can be obtained by prescription or often by mail.

Women needing surgical abortions will be welcome in many states, and substantial money is being amassed to ensure that the expenses of travel and lodging won’t prevent needy women from availing of the service.

About two-thirds of women who benefit from abortion services are poor.  They feel that they are in no economic position to care for a new baby.  Their situation could be greatly alleviated by generous government services for the wellbeing of the newborn and his or her family.

For instance, paid family leave which guarantees time off work for mothers after birth, represents a major benefit for women planning a family. In Chile, expectant mothers begin their mandated leave six weeks before their due date and it continues for an additional 12 weeks after birth. In Croatia the period of mandated leave is a generous 30 weeks.

These countries also require that mothers receive their full salary for the duration of their time off work. All Western countries provide similar support for women having a family. Less generous paternity leave benefits are also available in many capitals.

In the United States, the richest country in the world, the minimum paid maternity leave is zero weeks – end of story!  Forget about providing a helping hand for the fathers here.

Proposals for a minimum 12 weeks of paid leave for expectant mothers have failed in Congress because they are always opposed by the pro-life Republican Party.  While touting their commitment to the anti-abortion agenda, they oppose almost every proposal that would help poor or middle class people cope with a new arrival. They are pro-birth but anti-life.

The Irish government announced recently that all residents aged from 17 to 25 will be eligible for free contraceptives starting next month. Part of the reasoning behind this unusual decision is to encourage safe sexual practices for young people and to head off the need for an abortion.

The admirable Blasé J. Cupich, archbishop of Chicago, pinpoints the importance of a broad pro-life perspective when he stresses the glaring need for the movement “to defend the elderly, the sick, immigrants and those living in poverty.”

It would be a big step forward if the leaders on both sides could agree on supporting a badly needed major anti-poverty program that would definitely reduce the high number of abortions in America by attacking the root causes around worsening inequality.