Joe Biden has said he is "feeling good" about winning the US Presidential Election while Donald Trump calls it "a major fraud". 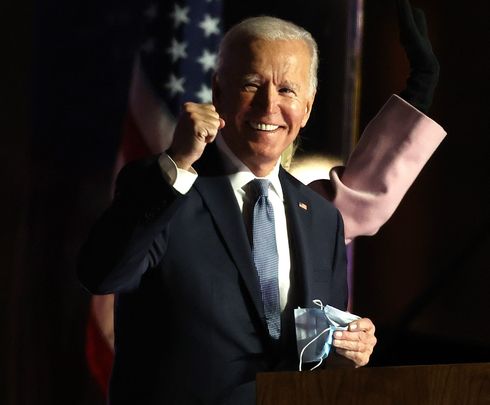 Joe Biden, speaking to his supporters in Delaware. Getty

While the final results are not in, former vice president Joe Biden has told his supports to have patience as results come down to key states of Pennsylvania, Wisconsin, and Michigan.

The results of the US 2020 Presidential Election are not in and counting could continue until Friday. However, Joe Biden, the Democratic candidate has told his supporters he's "feeling good" about the results thus far.

Currently, Biden has won 238 of the electoral college votes with Donald Trump taking 213. Candidates need 270 votes to win. Results for North Carolina, Georgia, Alaska, and Nevada are outstanding along with the key battleground states of Pennsylvania, Wisconsin, and Michigan.

Speaking to his supporters as the count continues Biden said "Your patience is commendable...We feel good about where we are. We really do.

"We believe we're on track to win this election.

"We knew because of the unprecedented early vote, that this would take a while. We need to be patient...

"It ain't over until every vote is counted, but we're feeling good about where we are."

Meanwhile, Donald Trump has claimed that the election is a "fraud" and declared victory calling on the counting to be stopped. Speaking at the White House the president said: "This is a fraud on the American public. This is an embarrassment to our country."

Trump has also threatened to challenge the election results in the supreme court.

Several states allow postal votes to be accepted after polling day, as long as they were postmarked by Tuesday, Nov 3. That includes Pennsylvania, which means that the results of their count may not be returned until Friday. President Trump suggested those ballots should not be counted, despite the court ruling.

On Wednesday morning Father Sean McManus is head of the Irish National Caucus, in Washington DC told Newstalk "If Trump wins another four years, America is in profoundly serious trouble and may not recover for another 100 years.

"And I don't know if people at home in Ireland, and Dublin, realize the seriousness of it.

"I came to this country in 1972 - and I was aware of course of the problems America had.

"But it never even occurred to me to be troubled about the future of America.

"I always hoped that things would improve in the civil rights movement and all of that.

"But now since Trump has taken over him, I have seen how quickly a great democracy can be imploded from inside by the President of the United States.

"He has done ferocious damage to America, he has taken down and assaulted every one of the main institutions in America.

"It's quite extraordinary and it's quite frightening.

"Now he's talking about the Democrats stealing the election - they're not trying to do that.

"But he has made every effort to do that.

"This is something I never dreamed I would be saying".