Bridie Higgins has already cast her vote for Joe Biden. 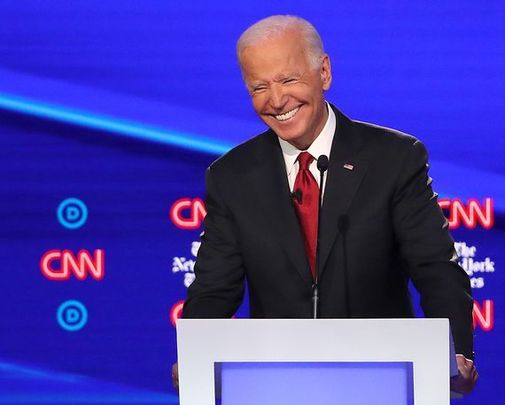 Joe Biden during a Democratic debate earlier this year. Getty

An American citizen living in a Galway nursing home has said that she will "drink Jameson" if Joe Biden wins the presidential election on Tuesday.

Bridie Higgins, an 85-year-old US citizen who has voted for Joe Biden ahead of Tuesday's election, told the Irish Times that she plans to nap during the day on Tuesday so she can stay up and watch the election unfold in the early hours of Wednesday morning.

"I wouldn’t miss the election for anything. I will be staying up late; that is for sure," Higgins told the Irish Times.

Higgins, who grew up in Moylough, County Galway, spent most of her life in New York before moving back to Ireland and she now resides at the Greenpark Nursing Home in Tuam.

The American citizen has closely followed the election so far and says that she's requested a celebratory party at the nursing home if Joe Biden manages to beat Donald Trump.

"I have requested a ‘B&B’– Bridie and Biden – party for if he wins. We will have Jamesons if he wins, and if he doesn’t win then we will drown our sorrows," she told the Irish Times.

"I read about Biden’s life and what he had done in America and how compassionate he is about all the problems people face in life."

She said that she has never been impressed by President Donald Trump and that she never intended to vote for him.

Higgins, a former teacher in New York, said that Biden has shown that he is an advocate for education, which was an important factor in winning her vote.

"I feel we need somebody who would be more compassionate [than Trump] and a little bit more caring about the ordinary citizens of America," she said.