Biden tells Pope: “I'm the only Irish man you've ever met who's never had a drink”

President Biden worked in an Irish quip while presenting Pope Francis with a command coin at the Vatican. 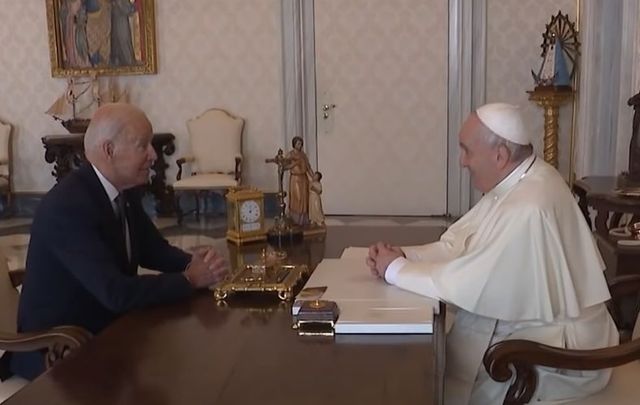 US President Joe Biden met with Pope Francis at the Vatican today, October 29, and used the opportunity to again tout his Irish roots.

Biden made the Irish quip while presenting Pope Francis with a command coin at the Vatican on Friday.

Biden, a lifelong Catholic, told Pope Francis through a translator: "I'm not sure if this is appropriate, but there's a tradition in America. The president has what is called a 'command coin' that he gives to warriors and leaders.

"And you are the most significant warrior for peace I've ever met. And with your permission, I'd like to be able to give you a coin."

Showing the Pope the coin, Biden said how it has the US seal on the front and on the back, it has the insignia of the 261st Signal Brigade unit in the Delaware Army National Guard, where Biden's late son Beau served as captain.

“I know my son would want me to give this you,” Biden said.

He continued: "Now the tradition is, and I'm only kidding about this, if next time I see you and you don't have it, you have to buy the drinks.

"I'm the only Irishman you've ever met who's never had a drink," Biden said with a laugh, which was received warmly by the Pope who responded that Irish people "love whiskey."

"I know that!" Biden said, smiling.

You can watch the exchange here:

Biden, who is the first Catholic president of the US since John F. Kennedy, has previously met with Pope Francis several times, with the most recent being in 2016 when Biden was Vice President.

After his meeting with the Pope on Friday, Biden met with Vatican Secretary of State Cardinal Pietro Parolin, accompanied by the Secretary for Relations with States Archbishop Richard Paul Gallagher.

Among those who accompanied the President during this visit to the Vatican were his wife Dr. Jill Biden, Secretary of State Antony Blinken, and National Security Advisor Jake Sullivan.

According to NPR, Biden said the pontiff did voice support for him continuing to receive Communion, but he declined to say whether the two had specifically talked about the calls to deny him the Eucharist.

"We just talked about the fact that he was happy I was a good Catholic and keep receiving Communion," Biden said.

It was an honor to meet with Pope Francis again at the Vatican today. I thanked His Holiness for his advocacy for the world’s poor and those suffering from hunger, conflict, and persecution, and lauded his leadership in fighting the climate crisis and ending the pandemic. pic.twitter.com/PGF5axSK4X

In a statement after today's meeting at the Vatican, the White House said: "In his audience with Pope Francis today, President Biden thanked His Holiness for his advocacy for the world’s poor and those suffering from hunger, conflict, and persecution.

"He lauded Pope Francis’ leadership in fighting the climate crisis, as well as his advocacy to ensure the pandemic ends for everyone through vaccine sharing and an equitable global economic recovery."

Later today, Biden is set to meet with Italian President Sergio Mattarella and Prime Minister Mario Draghi, as well as French President Emmanuel Macron. Biden will then take part in the G20 Summit in Rome October 30 - 31.

On Monday, Biden will travel to Glasgow to attend COP26, the UN Climate Change Conference.