Joe Biden's great-great-grandparents emigrated from Louth and Mayo in the 19th century and the President has proudly celebrated his Irish roots throughout his political career. 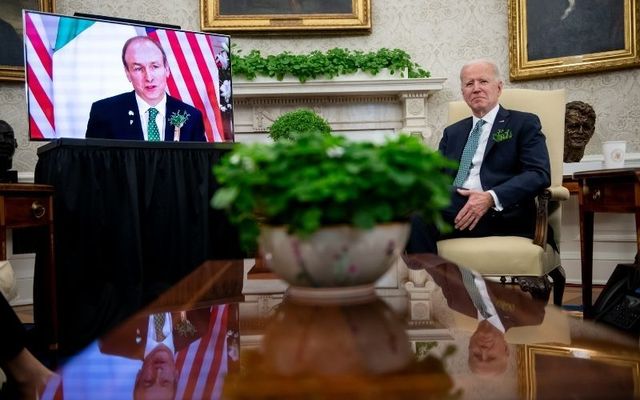 The Washington Post has claimed that Joe Biden's Irish heritage has played a key role in shaping his policies and his political career.

The Post published an op-ed by Matt Viser shortly after Biden's virtual meeting with Taoiseach Micheál Martin on St. Patrick's Day and painted him as "one of the nation's most Irish of presidents".

Viser wrote that Biden's Irishness is more than just a display and said that he uses it to frame his personal story and political identity. Biden uses his Irish ancestry to explain his emotional outbursts during debates, pointing to his Irish temper. The President also uses his Irish heritage to explain his willingness to weep in public.

Biden's identification with a long-oppressed group of minorities allows him to paint himself as "Middle-Class Joe", even as he holds the most powerful political office in the world, according to Viser.

Viser quoted a speech from Biden before the presidential election last November where the President used his working-class upbringing in the predominately Irish city of Scranton to identify with people who were suffering economic hardship.

"Guys who think because they have a lot more money that they’re better than you, look down on you. I acknowledge I got a — I have a chip on my shoulder, coming from an Irish Catholic neighborhood where it wasn’t viewed as being such a great thing," Biden said shortly before November's election.

The Washington Post's national political reporter also said that Biden also connects his Irishness to his immigration policies and ideologies by pointing to his ancestors' journeys to America onboard "coffin ships" during the Great Hunger.

"All of our ancestors, yours and mine, they came equipped with only one thing — the only thing they had in their pocket was hope," he said last September.

Biden, who can trace ten of his 16 great-great-grandparents back to Ireland, also uses his Irish heritage to address discrimination in the workplace, pointing to the "No Irish Need Apply" signs that appeared in American and British workplaces at various points in history.

He also includes a number of Irish sayings and quotes from renowned Irish poets in his speeches, claiming that Irish poets are the very best in the world.

Biden, whose ancestors emigrated from Louth and Mayo in the 19th century, told Niall O'Dowd of his proud Irish heritage and his  Irish Catholic upbringing.

"I grew up in Scranton, in a predominantly Irish neighborhood and an overwhelmingly Irish parish," Biden told Irish America magazine. "It was a city that had some typically eastern ethnic divisions. There was a clear identification with people being Irish; 90 percent of my class­mates identified themselves as such."

The President commended the Irish spirit and proudly spoke of Irish people's contributions to the United States of America.

"I'm speaking to you from a White House designed by an Irish hand," Biden said, while proudly clenching his fist.

As a descendant of the Blewitts from Mayo County and the Finnegans from County Louth, I’m wishing everyone a happy St. Patrick’s Day. pic.twitter.com/nbYHPO8nE7

Biden enjoyed an "Irish festival" at the White House on Wednesday, meeting with Taoiseach Micheál Martin in the afternoon via video call to discuss the historic relationship between the two nations.

He also flew to St. Patrick's Church near his home in Wilmington Delaware to celebrate mass in a further nod to his proud Irish Catholic roots.

It was clearly a proud day for Biden, who wore a fistful of shamrocks in his jacket pocket as he spoke the Taoiseach. The President has made no secret of his Irish ancestry and, as the Washinton Post points out, that ancestry has helped shape his career, enabling him to mark St. Patrick's Day from the Oval Office.