A Biden - Buttigieg ticket could derail not only Bernie Sanders, but could be a formidable force against President Trump in the upcoming presidential election. 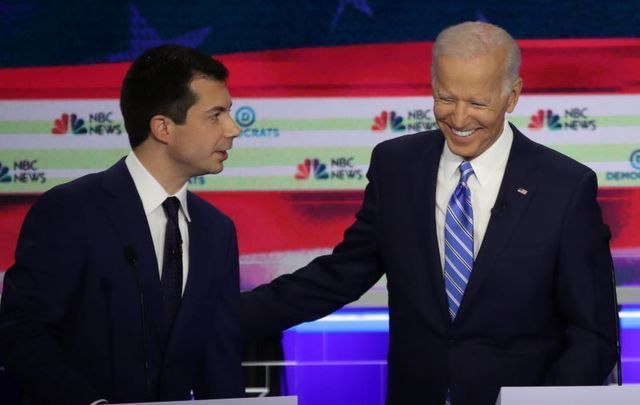 Pete Buttigieg and Joe Biden during the second night of the first Democratic presidential debate on June 27, 2019 in Miami, Florida. Getty Images

The runaway train called Bernie Sanders looks likely to have victory in sight for the Democratic nomination by March’s “Super Tuesday” unless something changes drastically.

Read More: Democrats call on US citizens in Ireland to vote in Presidential Primaries

Tuesday night’s debate in South Carolina was contentious and poorly moderated so Bernie was able to bat away most of the tougher charges and questions that were thrown at him in the general confusion.

It strikes me he is on the road and almost out of sight unless something extraordinary happens.

Which is why I think Joe Biden should offer the VP slot to Pete Buttigieg sometime before the weekend and put together a formidable team that suits both men.

Buttigieg will be running on empty after Super Tuesday and Biden will need a significant boost to make himself competitive again.

Sure VPs get picked at Party conventions, but there are no rules against deciding your running order much earlier.

Indeed Mayor Pete, just about the most elegant speaker on the campaign trail, has proved his worth by winning Iowa. He gives Biden a powerful mudguard as his VP among younger audiences

He is young, gay, incredibly talented, and scores very well with college-age and older married couples.

Biden speaks to the Black vote and has a good share of the Hispanic vote, as well as the obvious experience to take over the White House from day one.

The two together are greater than the sum of their parts and with Biden aged 78 there would likely be a natural transition after one term.

Read More:  Joe Biden - a requiem for a political heavyweight?

What do both men have to lose? They can continue to chase Bernie’s tail but the roadrunner has escaped too far in front.

Together, though, they can split the atom and can gain considerable momentum. While it is highly unusual, Senator Ted Cruz and Senator Marco Rubio had thought of it to stop Trump four years earlier but the effort foundered.

This time it Buttigieg’s followers coming on board for Biden and it could be an unstoppable train.

It is unorthodox, but in my opinion, the only hope to defeat Sanders for the nomination.