Dermot Shea was sworn in as the 44th Police Commissioner by Mayor Bill de Blasio on Monday. 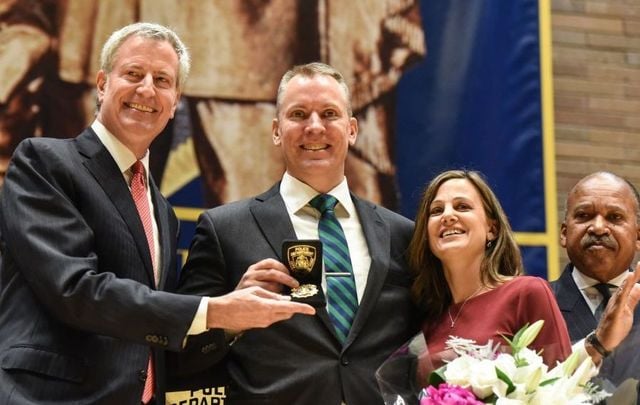 Shea was accompanied by his wife Sarena, five children and his 3-year-old grandchild Aiden as he was sworn in as the city’s 44th Commissioner, the fourth Irish American in a row to take on the role. The 30-year NYPD veteran was also accompanied by his mother Ellen, an Irish immigrant who moved to the city in the 1950s.

Ellen commented that the family “are very proud of him,” while Shea himself commented on his Irish upbringing during his speech.

“The man that I am today, I am because of two people: My mother and father – two immigrants who came from Ireland in the 1950s, met here in New York, settled in Queens, and raised five children,” Shea said.

“They came here like so many others, with a dream for a better life. And they instilled in all of their children values that, to this day, make us who we are. Values such as: sacrifice, love, faith, decency – treating all people as you would treat your own family. Mom, thank you. And I love you."

Deeply honored to entrust the safety of 8.6 million New Yorkers to our next @NYPDnews Commissioner, Dermot Shea.

He knows that together we can move forward, we can be even greater and we can become the shining city on the hill.

Shea’s appointment prompted questions about diversity in the leadership roles in the NYPD, to which de Blasio responded: “in the next few years, you’re going to see a lot of leadership elevated that represent the full diversity of New York City.”

“Someone who has such inherent faith in this department and the men and women who make it great, but also has a belief in our people and a love for the people of this city. When he grills a colleague, it’s not out of anger, it’s out of hope that we can get even better. When he puts an idea out that no one’s thought about before or been willing to say out loud, it’s because he’s not afraid to dream. It’s a rarity that you get to watch someone for six years through thick and thin deal with every kind of scenario. But what I saw was a man who was always ready to innovate, always ready to hope, and I saw the inspirational impact that he had on others.”

“We promise to do, especially for those who need our help the most, what nobody else can do. And importantly, we will prove, that when the public & police work together, we can make positive lasting change.”
-Commissioner Dermot Shea

In his speech, Commissioner Shea stated he believed they could make “the city even safer.”

“New York was a very different, much more violent place back then,” Commissioner Shea recalled.

“The year I joined the NYPD, it was between 2,100 and 2,200 homicides just that year, think of that. Last year, there were 295 homicides, and it was [kept low] because of the work of the men and women of this great department. Burned out buildings, garbage-strewn streets, vacant lots have now been replaced by parks and condominiums. And while the city has been absolutely transformed and policing too has changed in many respects, there are some constants that are as true today as they were 29 years ago.”