NYPD Commissioner Dermot Shea is calling for change after three innocent bystanders, including one toddler, were shot in Times Square. 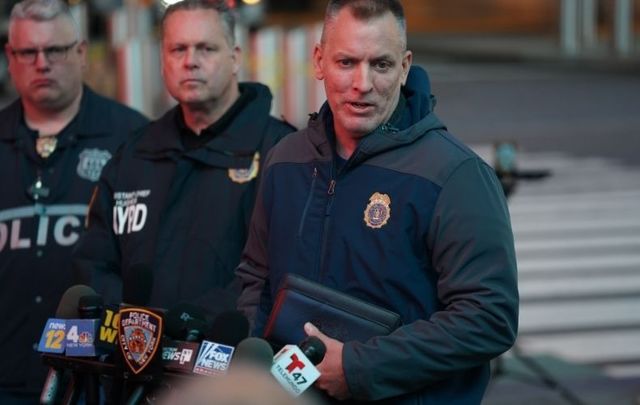 NYPD Commissioner Dermot Shea called for reform to New York City laws after three people, two women and a four-year-old child, were injured in a shooting in Times Square on Saturday.

"How many more kids need to be shot before we take this seriously?," Irish American Commissioner Shea told reporters on Saturday evening.

"How many more kids do we need to be shot before we realize that bad policies have consequences?" he added.

"We need action, and we need policies regarding laws to have consequences."

When asked what the "bad policies" are, Shea responded: "We've gone over it many times, I think you're seeing it play out, and it's time that it stops."

He added that the "proliferation" of guns throughout New York City over the last few years was a cause for concern and said that NYPD officers had been "taking guns off the street at an alarming rate over the last two years."

The shooting took place at around 5 pm EST on Saturday, May 8 at the intersection of Seventh Avenue and 44th Street in Times Square after a dispute broke out between two to four men.

Shea said that the three victims were innocent bystanders who were caught in the crossfire of the dispute.

Shea said that the four-year-old victim, whom he described as "very brave," was buying toys with her family when she was shot. The toddler will undergo surgery for the injuries she sustained.

The NYPD has released a video of the suspect in an appeal for information on Twitter.

WANTED in connection to shooting three people near West 44th Street and 7th Avenue in Manhattan on May 8, 2021. @NYPDDetectives need anyone with information about the identity or whereabouts of this individual to contact @NYPDTips at #800577TIPS. All calls are anonymous. pic.twitter.com/qciBGCR6AK

Gun crimes in New York have increased rapidly since the outbreak of the pandemic. The NYPD recorded a 166% increase in gun crime in April compared to the same month last year, from 56 in April 2020 to 149 this year.

Meanwhile, the number of violent incidents in Times Square has increased from 17 in the first quarter of 2020 to 25 in the same period this year.

In general, crime has increased by around 30% in New York over the past 12 months.