"It’s not stubbornness on our part – it’s desperation... we’ve been left to languish." 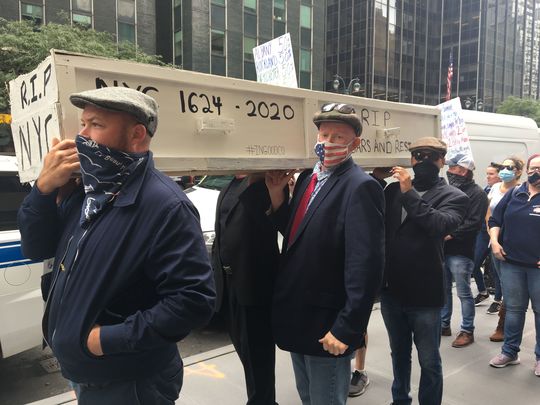 Attendees at the rally carry a makeshift casket symbolizing the death of the city’s hospitality industry. Debbie McGoldrick

New York City bar and restaurant owners rallied outside Governor Andrew Cuomo’s office on Monday begging for immediate assistance to prevent them from closing their doors for good.

The bagpipes were playing and old friends were happily greeting each other, but the occasion that brought them together on Monday morning couldn’t have been more serious – the saving of New York City’s bars and restaurants which are in desperate need of a lifeline to avoid imminent and permanent closure.

More than 1,200 owners and restaurant workers, many still unemployed, gathered on East 38th Street to march to Governor Andrew Cuomo’s office on Third Avenue and 41st Street with two urgent demands: immediate indoor dining at 50 percent capacity, already in place throughout the state for several months, and passage of the federal Restaurants Act which would provide a source of funding to cope with the nearly fatal economic effect of COVID-19 on the industry.

“The governor feels that he’s done enough and we should be grateful. We are here today to tell the governor that he hasn’t done enough,” said Mark Fox, the Dublin native and restaurant owner who organized the rally outside of Cuomo’s Manhattan office at 633 Third Avenue, on the 38th floor. 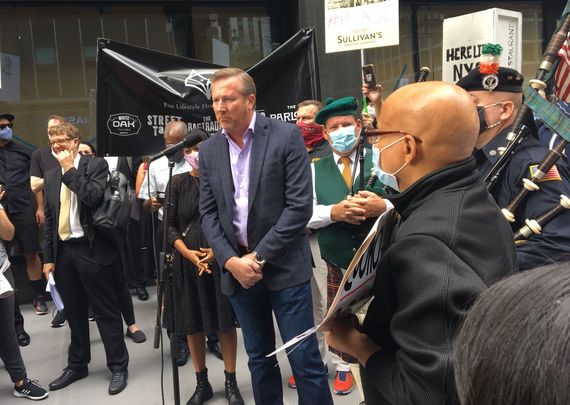 “We recognize that he flattened the curve and won the admiration of the nation…and he did take care of our physical health, but the job is half done. Our financial health is the second half, and he can’t walk away from us now because we are only half done.”

There’s no way restaurants can keep their doors open for long under a 25 percent constraint said Fox, chairman of the Fox Lifestyle Hospitality Group.  “If an immediate hike to 50 percent isn’t in the works some places simply won’t survive,” he added.

“It’s not stubbornness on our part – it’s desperation.  With proper safety protocols, this can be managed.  In the city, we pay the most rent per square foot in the entire state, yet we’ve been left to languish.

“We need 50 percent today and not a month from now.  Those four weeks are going to mean the difference for hundreds of Mom and Pops that cannot hang on because they don’t have the cash reserves.” 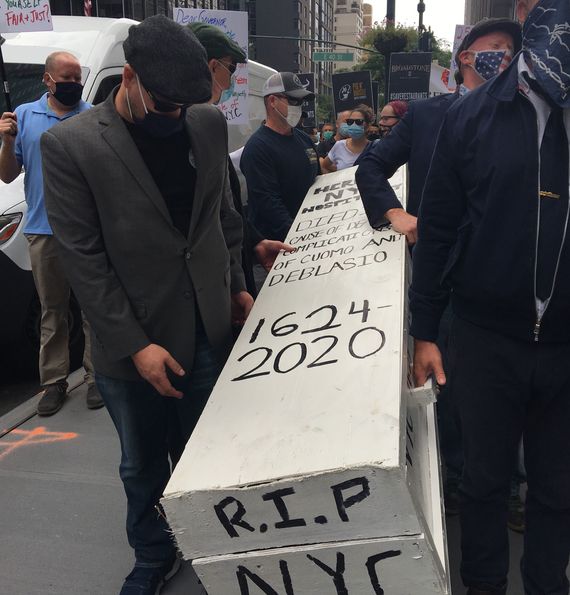 Members of Congress, Fox added, need to pay attention to the plight of the hospitality industry not only in New York but throughout the country, and Cuomo is just the person to impress upon them how serious the situation is.

“He has the acumen and the ability and the contacts. He’s in a unique position to effect change,” Fox said.

“Now Congress is focused on the Supreme Court nomination and the election, but here we are on our knees as the Restaurants Act has universal support, but it’s languishing because their priority is partisanship. It’s a disgrace.”

Dan Tubridy from the Rockaways, a happily retired former publican who owned the locally famous Dingy Dan’s and Pier 92, was at the rally to show support with good reason – his five sons are in the business, two of whom are co-owners of the ICG Hospitality Group which operates 10 bars/restaurants throughout the boroughs, and also the newly opened Rockaway Hotel.  Seven of the venues have been closed since March.

“The governor has to stop treating us like children. It’s that simple,” Tubridy told the Irish Voice.  “We are responsible businessmen who want our customers to be happy and safe.”

There were several dozen restaurant workers from the Rockaways at the rally, some of whom carried a wooden casket painted with some grim words: “Here Lies NYC Hospitality. Died 2020. Cause of Death—Complications of Cuomo and de Blasio.” 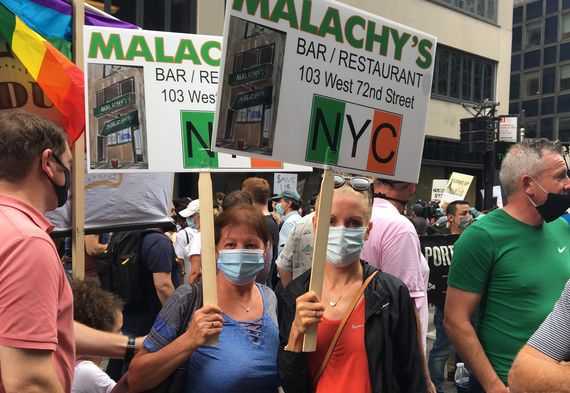 Malachy’s was one of many Irish businesses represented

De Blasio’s office at City Hall was the setting for a similar rally two weeks ago, but those in attendance at Monday’s event – many of whom were Irish -- feel that the real power rests in Cuomo’s hands.

Michael Meade, the U.S. CEO of the Co. Kilkenny-based craft beer maker Sullivan’s Brewing Company urged the governor to do the “right thing.”

“We need 100 percent capacity by Thanksgiving and the holidays, or else we’re in trouble. We’re already in trouble so enough is enough. I’m looking at your building – stand up and do the right thing. This is how we eat. This is how we live. This is how we try for the American dream,” he said to cheers from those in attendance.

Many of those hopes are on the verge of being shattered for good, several business owners told the Irish Voice.  Monday’s crowd was full of Irish natives who are worried about their survival, including Theresa Kelly, a native of Co. Leitrim who owns Malachy’s bar and restaurant on West 72nd Street.  Malachy’s has been closed since March, and outdoor dining wasn’t an option because it’s located next to a fire hydrant and bus stop.

“It’s very tough. We don’t know what’s going to happen,” said Kelly, who has continued to pay rent on her shuttered business. “We have no answers right now.”

Jimmy Sullivan, originally from Listowel, County Kerry, attended the rally with a number of his employees from Sean Og’s in Woodside, Queens. His other venue a couple of doors down, the Woodside Café, is shuttered with no imminent plan for reopening. 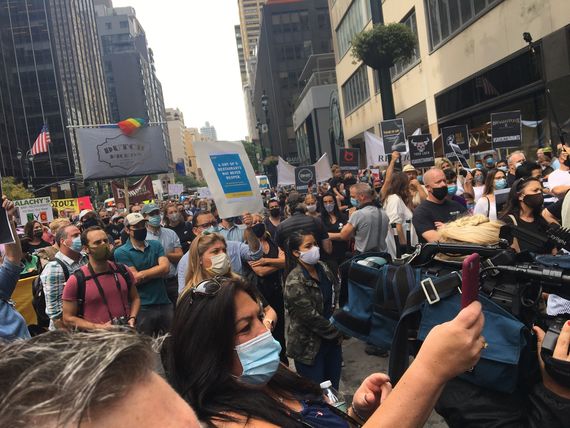 “It has occupancy of 74, so opening at 25 percent just doesn’t work,” he told the Irish Voice.

The 25 percent indoor dining restriction “is going to be more of a challenge than a benefit,” he feels. “You need more staff to do temperature checks and other things.  That doesn’t happen on Long Island or in Westchester, so why do we have to do it?”
Fox Lifestyle Hospitality Vice President Oneca Lazarus got the crowd shouting “Time’s Up” and “50 Percent Now” as loud as they could, more than one time, to send a message to the governor, who was actually in Albany for the day.