Ireland loses out on a world-record number of sports fans and an economic boost of $71.6 million as College Football Season Opener pulled due to COVID-19. 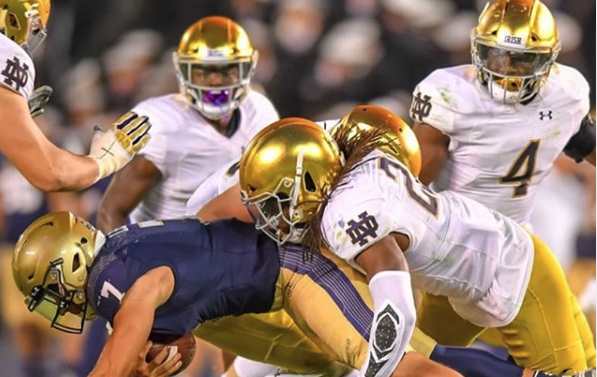 The 2020 Aer Lingus College Football Classic: Navy vs Notre Dame at Dublin's Aviva Stadium has been relocated due to the coronavirus.

The 2020 Aer Lingus College Football Classic: Navy vs Notre Dame has been canceled following extensive consultation with the Irish government, medical authorities, and the leadership teams at Navy and Notre Dame. The game was scheduled for August 29

It is the intention of both Navy and Notre Dame to open the 2020 college football season with the 94th consecutive playing of the longest continuous intersectional rivalry in the country at Navy-Marine Corps Memorial Stadium in Annapolis, Maryland.

Almost 40,000 United States visitors had booked to travel for the August 29 College Football season opener. This would have made it the largest number of American’s to travel outside of the United States for a single sporting event.

The game was due to be televised coast-to-coast in the United States by ESPN to an estimated six million viewers. ESPN’s College GameDay pre-show was also due to be broadcasted live from College Green in Dublin.

The previous Navy vs Notre Dame fixture in Aviva Stadium in 2012 will continue to hold the record when 35,000 fans traveling from the US, resulting in one of the largest economic and tourism boosts for the country in recent memory.

An Taoiseach (Prime Minister) Leo Varadkar T.D said; “College football is one of the greatest spectacles in world sport and we had been thoroughly looking forward to welcoming Navy and Notre Dame here this summer for the first game of the Aer Lingus College Football Classic Series. Unfortunately, due to circumstances beyond our control, that is now not possible, but we hope to see both universities return to Aviva Stadium in the coming years.”

"We are obviously disappointed not to be traveling to Ireland this August,” said Naval Academy Director of Athletics Chet Gladchuk.  “But, as expected, our priority must be ensuring the health and safety of all involved.  I am expecting that we will still be able to play Notre Dame as our season opener, but there is still much to be determined by health officials and those that govern college football at large.  Once we have a definitive plan in place, we will announce the specifics pertaining to the game.

He added, "I realize many are disappointed and were looking forward to the spectacle of this event and a visit to the Emerald Isle, but I do know there is a complete understanding of why it's in our best interests to make every effort to relocate the game."

Read more:  Move it Monday with the Shannon Gaels GAA!

The five-game Aer Lingus College Football Classic Series is now due to start in 2021, which is estimated by Grant Thornton and Fáilte Ireland to be worth a €250 million boost to the Irish economy over the coming years. The moving of the 2020 fixture from Dublin, will see a direct economic loss of $71.6 million (€80m) to the Irish economy according to the Steering Committee of the Game Series, which is a public/private partnership.

The series will now commence on August 28, 2021, when the University of Illinois will play the University of Nebraska at the Aviva Stadium Dublin for the 2021 season opener. This will be the first time that either team has traveled to Ireland with the game expected to draw a huge interest from sports fans both in the US and Europe as Nebraska is one of the most successful American College Football teams in history and Illinois has significant links with Ireland. Ticketing and additional information available on www.collegefootballireland.com.

Navy and Notre Dame will continue to work closely with the event organizers to plan for a return to Ireland in the coming years. Ticketholders will be contacted by their purchase provider in the coming days.