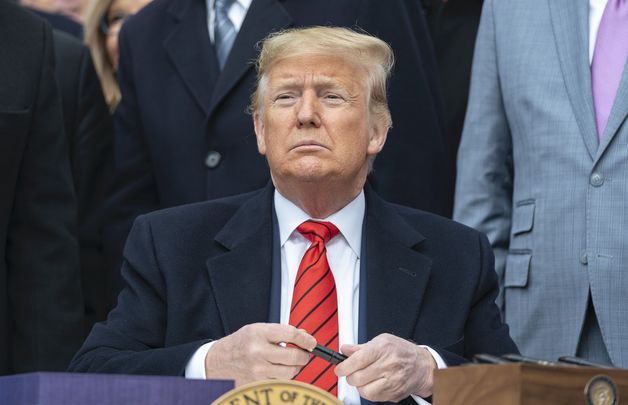 Jolene Bunting was voted out of the Belfast City Council last year and is calling on Ulster-Scots to vote for Donald Trump. White House Flickr/Public Domain

A controversial Unionist politician has launched an online crowdfunder to fund a pro-Donald Trump trailer campaign in Northern Ireland.

Jolene Bunting, an ex-Unionist councillor in Belfast, is appealing to her Twitter followers to donate to her "Ulster-Scots for Trump" campaign, which seeks to raise £1,650 ($2,200) to cover the cost of a trailer, tow bar, fuel and "Make America Great Again" hats.

She also plans to buy placards, banners and flags to show her support for Donald Trump.

Bunting plans to "travel the length and breadth of Ulster" showing her support for the American president as part of her campaign. She believes that the Ulster-Scots diaspora in the US can help shape November's election.

"A group of Northern Ireland-based Trump supporters have come together to show our support for Donald J Trump in the run-up to the 2020 election," Bunting's online donation page reads.

Read more: Unionism is faltering on way to North's 100 anniversary

"Ulster-Scots have helped to shape the American way of life," the website says, urging Americans with an Ulster-Scots ancestry to back Trump this November.

In 2018, she provoked outrage when she took part in a Britain First rally in Belfast City Center. Britain First is a far-right anti-immigrant group promoting British nationalism and fascism.

She also made discriminatory comments in a video outside the Belfast Islamic Center and received a four-month suspension from the Belfast City Council in 2018 after 14 complaints were made against her.

She appealed the decision, but the judge presiding over the case upheld the verdict, pointing to the long history of anti-Islamic speeches and comments.

Ulster-Scots, meanwhile, are one of the most influential migrant communities in the United States with over 27 million estimated descendants living in America.

Known as Scots Irish in America, Ulster-Scots are the descendants of Protestant Presbyterian Lowland Scottish colonists who migrated to Ireland during the plantation of Ireland, when British authorities confiscated land from Gaelic clans and gave it to protestants loyal to the crown.

A large number of Ulster-Scots then emigrated from Ireland to the new world in America in the early 18th century.

The ethnic group has a somewhat problematic history, with several prominent confederate figures claiming Ulster-Scots heritage. Robert E. Lee, Stonewall Jackson, and Confederate President Jefferson Davis all had an Ulster-Scots background and appear on a Belfast mural alongside the caption "The Sons of Ulster Who Fought Northern Aggression."

Andrew Jackson, an increasingly controversial president due to the large number of slaves he owned, also came from an Ulster-Scots background, and Bunting's campaign actually draws comparisons between Trump and Jackson.

"Donald J Trump has much in common with Andrew Jackson, both men hated by the establishment for their populist, anti-establishment politics," the campaign says.