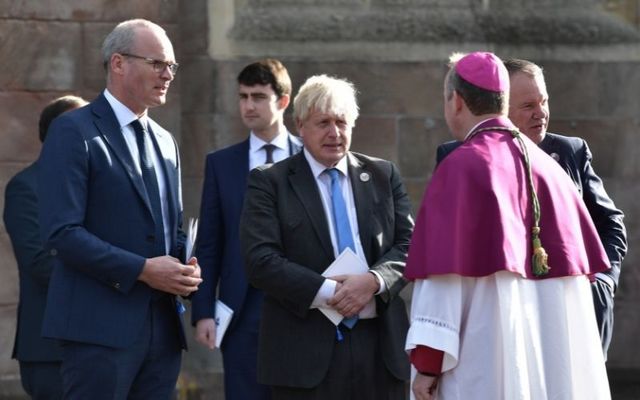 Today’s Service of Reflection and Hope was an important reminder of the need to move forward together in a spirit of reconciliation and hope. We must uphold the sense of mutual respect and optimism we all saw today as we look to Northern Ireland’s future. #NIBeyond100 pic.twitter.com/ae4cFJT0Ns

President of Ireland Michael D. Higgins and Queen Elizabeth II were also not in attendance, with Higgins announcing in September that he was declining an invitation because the event's title was too political. Buckingham Palace announced yesterday, October 20, that the Queen would not be attending the service on medical advice.

Leaders of the Catholic, Protestant, Methodist, and Presbyterian Churches all attended the service, including Roman Catholic Primate of Ireland Eamon Martin, who told the congregation that partition remains a symbol of cultural and political division in Northern Ireland.

Speaking at the service, Martin said that partition "institutionalized difference and remains a symbol of cultural, political and religious division between our communities".

"Today I reflect as a church leader on the past 100 years. I have to face the difficult truth that perhaps we in the churches, could have done more to deepen our understanding of each other, and to bring healing and peace to our divided and wounded communities," Martin said.

Presbyterian Moderator Dr. David Bruce also spoke at the service and said that he looked back over the last 100 years with "mixed feelings".

"Northern Ireland is my home and I love it. But I lament the physical and emotional pain which has been caused over this last century to so many people by violence and the words which lead to violence," Bruce said.

The sermon was delivered by President of the Methodist Church of Ireland Dr. Sahr Yambusu.

Yambusu, who is originally from Sierra Leone and is the first African-born leader of one of the main churches in Ireland, told the service that Northern Ireland had "come a long way" since its foundation.

"During that time, people have cared for one another and made efforts to build community. For this we give thanks. But we have also been blighted by sectarian divisions, terrible injustices, destructive violence, and by win-lose political attitudes. And for this, we have cause to lament."