There has been a noticeable increase in Irish populations of Noble False Widow spiders, a study from NUI Galway's Ryan Institute has found. 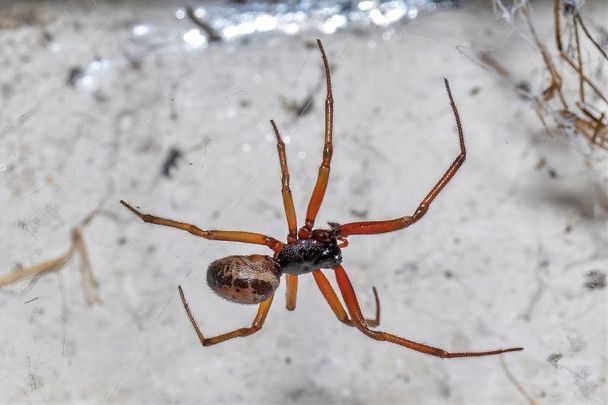 The Noble False Widow is considered "highly competitive against native European spiders sharing the same habitats" thanks to its high venom potency and ability to optimize venom usage, an Irish research study has found.

The study was conducted by scientists at NUI Galway's Ryan Institute and published last week in the international journal Toxins.

Did you know that the Noble False Widow spider's venom is 230 times more potent than native spiders?

In a bid to understand why the Noble False Widow spider is so successful at spreading in towns and cities throughout the world, the team at NUI Galway's Ryan Institute investigated the potency of its venom and compared it with the venom of some of Ireland's native spiders it competes with for available resources.

The new study demonstrates that the Noble False Widow spider possesses venom up to 230 times more potent than that of native Northern European species it routinely encounters in Ireland.

This may explain why Noble False Widows can tackle a range of organisms much larger than themselves, including lizards, bats, shrews, and other spiders.

The study also found that Noble False Widows can make calculated decisions on whether to attack large or small prey depending on how much venom is left in their venom glands. If little venom is available, they avoid facing large opponents that could injure them, and instead focus on small prey.

Scientists also demonstrate that in a battle, the Noble False Widow does not inject its venom randomly, but instead targets the most innervated body parts of its enemy, where the neurotoxic venom is most efficient.

Overall, the Noble False Widow spider killed and ate 95% of its opponents over the course of the study.

The Noble False Widow is known for its medical significance, having the ability to cause a range of mild to severe symptoms in people who are bitten, but little is known about its ecological impact on native species.

Over the past five years, the team at the University’s Venom Systems Lab, led by Dr. Michel Dugon, has been studying a wide range of characteristics specific to the species including its venom, symptoms after envenomation, ecology, and behaviour.

Dr. Dugon, senior author of the study, said: “Over the years, we have learned a lot about the Noble false widow and its venom. This study is another important step to understand the true impact this species has on the ecosystems it invades throughout the world.”

Dr. John Dunbar, Irish Research Council Post-Doctoral fellow, Venom Systems Lab, Ryan Institute, NUI Galway and co-senior author of the study, said: “The Noble False Widow spider is a truly remarkable animal; at every turn, this species has surprised us in its ability to become globally invasive and dominate habitats it occupies.

"The tiniest amounts of venom - about 1,000th of a raindrop - can cause medically significant symptoms in humans that are about 250,000 times larger than them. Each new study brings us closer to understanding how exactly they are achieving their success.”

Originating from Madeira and the Canary Islands, the Noble False Widow spider Steatoda nobilis has the potential to become one of the world’s most invasive species of spider.

It was first reported in southern England in 1879. In recent decades, it has increased its range and population density, spreading northwards towards Scotland and westward through Wales and Ireland. In that time, the species has also spread globally across Europe, East Asia, North America, and South America.

Joint first author of the study and NUI Galway graduate, Sean Rayner, said: “Over the past number of years we have seen a noticeable increase in Irish populations of Noble False Widow. This study will help us further understand what makes them so successful and hopefully highlight their potential impact to our ecosystems.”

Aiste Vitkauskaite, researcher at the Venom Systems Lab and a joint-first author of the study, said: “This is an important study which provided evidence of the Noble False Widow's superiority as a competitor in terms of its venom and predatory strategies against the native spider populations in the laboratory setting. We are hoping that our findings will lead to wider field-based studies to quantify the true impact of this alien species on native arachnids.”

The team of scientists is encouraging members of the public to email them at falsewidow@nuigalway.ie to report sightings of the Noble False Widow spider in Ireland.