"There can be no hard border on the island of Ireland," President of the European Commission Ursula von der Leyen told Irish politicians in Dublin. 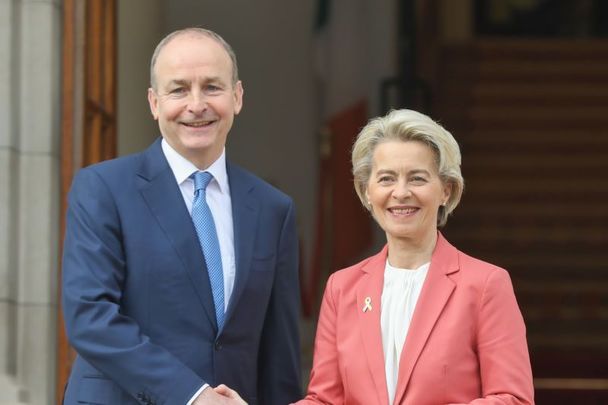 European Commission President Ursula Von der Leyen addressed the joint Houses of the Oireachtas on December 1, stating that there will be no hard border on the island of Ireland.

"Ireland can always count on the European Union to stand by the Good Friday Agreement," President von der Leyen told the Joint Houses of the Oireachtas on Thursday.

"There can be no hard border on the island of Ireland."

Earlier in her remarks, von der Leyen said: "Brexit will not become an obstacle on the path of reconciliation in Ireland."

She said any solution to the ongoing Brexit saga must involve Northern Ireland remaining in the single market and said a workable solution is "within reach" if all parties are "sensitive to this careful balance".

Von der Leyen said Brexit has thrust the EU and Ireland closer together and stated that all Europeans understand how important it is to preserve peace on the island of Ireland.

She also said Ireland "lies at the heart of Europe", stating that the country "shows Europe's best face".

"Joining the EU has unleashed Ireland's immense potential, and has profoundly transformed this country," she remarked.

"Today all other Europeans look up to Ireland," von der Leyen said, noting that the Irish people "are inclusive, loyal to your history, and open to the future and the world."

She continued: "Most Irish people will agree that EU membership has made Ireland a better place. But the other side of the story is just as important. Ireland has made Europe a better place. Europe owes you."

von der Leyen thanked Ireland for its contributions: "Go raibh maith agaibh, thank you from the bottom of my heart."

Loyal to your history and traditions.

Open to the future and the world.

In 50 years of 🇪🇺 membership, Ireland has made Europe a better place. https://t.co/cB9Bk1MMDH

She referenced some of the notable achievements Ireland has made since joining the EU, stating that Ireland's GDP has gone from half to double the EU's average since it joined the Union in 1973.

She said married Irish women were banned from working in the public sector when she was a teenager and quoted former Irish President Mary Robinson to note how "Irish women went from rocking the cradle to rocking the system".

Von der Leyen added that Ireland has "made the best of all the opportunities" since it joined the EU 50 years ago.

Speaking on the steps of Government Buildings before her address in the Oireachtas, von der Leyen thanked the Irish people for "opening their hearts" to Ukrainian refugees.

"Now, indeed, we are in difficult times because Russia unleashed an atrocious war against Ukraine. First and foremost, I want to thank the Irish people, for opening their hearts and their homes to Ukrainian refugees. This is outstanding.

"I want to thank you for the strong support for Ukraine to become a candidate member of the European Union."