Tertulia Bookstore opened in Westport in 2019 as "an inclusive social space and eclectic bookshop" and has hosted story hours for Mayo Pride in 2021 and 2022. 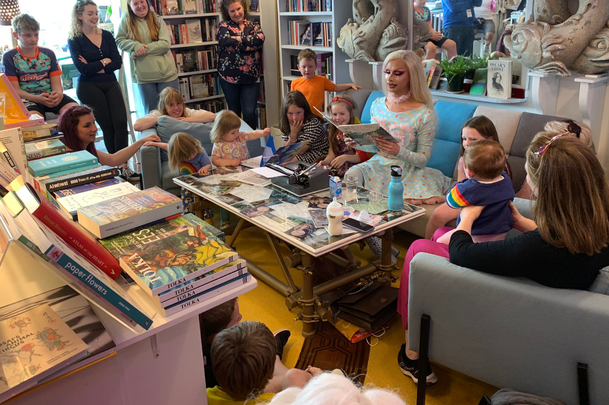 Panti Bliss: "We’re inside having story time. The fascists are outside screaming at the LGBTI+ community and the local Gardai." PantiBliss / Twitter

A Mayo bookshop that held a "Drag Queen Story Hour" for young readers as part of Mayo Pride celebrations in June received a deluge of hateful messages from "right-wing fascist online groups".

Tertulia Bookstore opened in Westport in 2019 as "an inclusive social space and eclectic bookshop" and has hosted story hours for Mayo Pride in 2021 and 2022.

The store received some online abuse after hosting its inaugural event last year, but that abuse proliferated significantly after its most recent story hour on Saturday, July 2.

Tertulia co-owner Neil Paul told the Irish Times that a message on the Telegram messaging platform urged people to contact the store to complain about the event.

"Please contact this business to confirm that the parents of Ireland will NOT stand for this ongoing mental & sexual of Children anymore!" the Telegram message said.

Paul told the Irish Times that the shop received a deluge of calls soon after the message was posted, with one woman accusing him of "reading pornographic material to young children".

He said the shop has received more than 60 calls from people who have read the Telegram message, adding that he now lets the phone go to voicemail.

Others have posted abuse on social media, attacking the bookshop owners and comparing them to child abusers.

One group that was initially established to oppose Covid-19 restrictions encouraged the "Men of Ireland please go to this show in Mayo and stop it", while a small group of protesters gathered outside the bookshop ahead of the story hour event.

We opened 2019 as an inclusive social space and eklectic bookshop, surviving a pandemic and economic slowdown. We support the LGBT+ community by hosting a Mayo Pride story time, for which we have been targetted by right wing Facist on line groups. Thank you all for your support. pic.twitter.com/vl29KpMbnb

"It’s a man dressed up as a woman reading Peppa Pig for Christ’s sake," Paul said, adding that children could only attend the event if they were accompanied by a parent.

Fellow co-owner Brid Conroy said people were asking others to "come out against" a small business.

"What’s most disconcerting is they were posting pictures of our bookshop on their channels and asking people to come out against us. We’re a small business. They’re picking on us because they can," Conroy told the Irish Times.

Conroy said people had a right to protest and added that the majority of those who protested against the event were not from Westport.

The small number of protesters, who photographed patrons as they entered the shop, were quickly outnumbered by a larger group of Pride attendees who arrived at the store to support the event.

Aimee said the events help children "to see beyond the blue and pink gender binary that kids often grow up learning about".