The parade, which started at Parnell Street before making its way down O'Connell Street and eventually finishing at Merrion Square, saw groups march, sing, and dance their way through the Irish capital while being cheered on by large crowds. 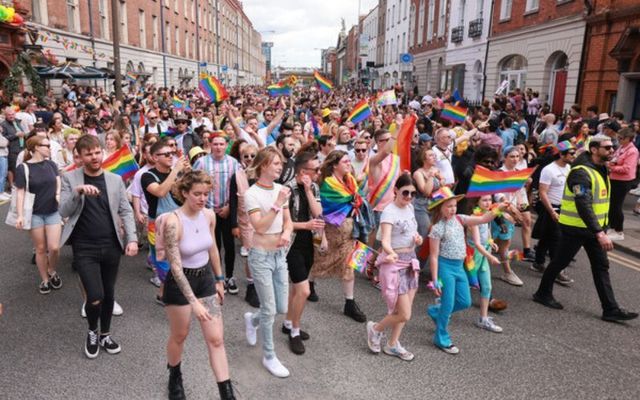 The Dublin Pride parade on its way to Merrion Square. Rolling News

Tens of thousands of people lined the streets of Dublin on Saturday to celebrate the city's first Pride parade since the outbreak of the Covid-19 pandemic.

The parade, which started at Parnell Street before making its way down O'Connell Street and eventually finishing at Merrion Square, saw groups march, sing, and dance their way through the Irish capital while being cheered on by large crowds.

Organizers said the parade played an important role in promoting diversity and inclusion in Irish society, adding that it was a celebration of LGBTQ+ people and their culture.

The theme of the 2022 Pride parade was courage, with organizers emphasizing the importance of standing up to hate and oppression.

Many of those who attended the parade said it had taken on an increased significance following two years of pandemic cancelations.

Dubliner Laura Harper, who watched the parade from near O'Connell Bridge, told the Irish Independent that she was "so happy" to see people being themselves.

"Ever since Covid people are just being themselves more, they are dressing way more out there and I just feel so happy to see people being themselves. It is so wonderful," Harper told the Irish Independent.

"I couldn’t love it more. I am celebrating Pride because I’m a lesbian and I know so many people that aren’t able to celebrate. I’m doing it for everybody and for me and anybody that can’t in any way because I want to be proud for all of us."

Brazilian national Natanael Llias told RTÉ that the Pride parade celebrates "everything positive" about Ireland and its support for diversity and inclusion.

The parade finished with a free full-day festival at Dublin's Merrion Square.

Taoiseach Micheál Martin and Tánaiste Leo Varadkar both marched in Saturday's parade, with Varadkar stating that he feels "privileged" to be gay in Ireland, adding that there are "many obstacles to overcome.

Martin spoke of upcoming hate crime legislation, ridding society of conversion therapy, and the need to rethink how young people are educated.

"We do not need divisive debate in this country on issues like that, we do not need it. We need tolerance and a celebration of diversity."

I feel privileged to be gay in Ireland but there are still many obstacles to overcome. #DublinPride #Pride https://t.co/Dh9YZYQwJm pic.twitter.com/MVY7NrCKGN