The Kennedy family is fondly remembering Maeve Kennedy Townsend McKean and her son Gideon after the duo, who disappeared while canoeing in Chesapeake Bay last week, has been presumed dead. 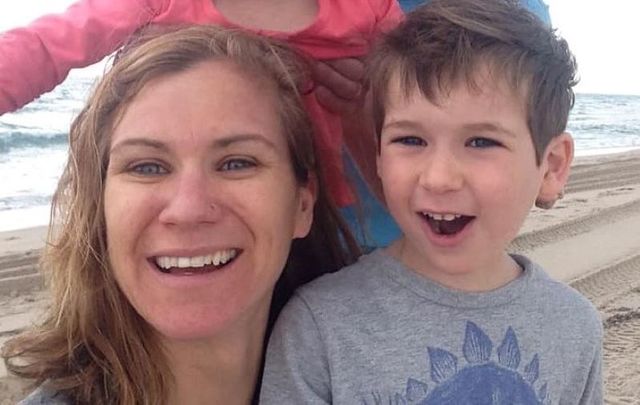 Maeve Kennedy Townsend McKean and her son Gideon are being fondly remembered after they've both been presumed dead. David McKean, Facebook

Maeve Kennedy Townsend McKean and her son Gideon have been presumed dead after disappearing while canoeing on Chesapeake Bay last week.

The extended Kennedy family is paying tribute to Maeve Kennedy Townsend McKean, 41, and her son Gideon, 8, who are both presumed dead after disappearing while canoeing in Chesapeake Bay last week.

On April 3, the US Coast Guard issued a statement saying that they had suspended the search for Maeve and Gideon. CBS in Baltimore reports that the recovery mission is set to resume today, Monday, April 6.

David McKean, Maeve's husband, and Gideon's father issued a statement on Friday confirming that the search had pivoted to a recovery mission. Other members of the extended Kennedy family have since shared their condolences and grief.

Kathleen Kennedy Townsend, daughter to the late Senator Robert F. Kennedy and Maeve’s mother, issued this statement: "With profound sadness, I share the news that the search for my beloved daughter Maeve and grandson Gideon has turned from rescue to recovery.

“Our Maeve devoted her life to helping society’s most vulnerable. She was a Peace Corps Volunteer who pursued a career in law to give voice to the voiceless. She was Executive Director of the Georgetown University Global Health Initiative and taught bioethics and human rights as an adjunct professor, where she gave hope to those who need it most. Maeve served on the board of the Brady Campaign and Robert F. Kennedy Human Rights, where she honored the standard that we are all defined by the plight of those society leaves behind.

“She was a PTA president, a soccer star, and a marathon runner.

“Maeve was vivid. You always knew when she was in a room. Her laughter was loud, unabashed, and infectious. She did everything with her full self and her whole heart. She gave the best hugs, sang loudly and out of tune, danced, wrestled, argued, forgave.

“Maeve shone. The fire emanating from her soul warmed us all.

“Her husband, David, and their children, Gideon, Gabriella, and Toby, were the great joys of her life. The role she treasured most was mom.

“Gideon, like his mom, was a star athlete who loved soccer, golf, and running. He took after his parents in the most extraordinary ways. He loved riddles, math, chess, and adventures. He loved to invent new games with his mom and share them with us all. Gideon was a loving and protective big brother to Gabriella and Toby.

“When my uncle Ted eulogized my father, he offered a prayer that what my father was to his family, and what he wished for others, would someday come to pass for all the world. This is our prayer for Maeve and Gideon.

“My heart is crushed, yet we shall try to summon the grace of God and what strength we have to honor the hope, energy and passion that Maeve and Gideon set forth into the world.

"My family thanks all for the outpouring of love and prayers as we grieve and try to bear this devastating loss."

Massachusetts Congressman Joe Kennedy III paid tribute to his first cousin Maeve and her son from his personal Twitter account:

We are deeply grateful for the outpouring of love and support our family has received over the last few days. They have been deeply painful ones. Thank you all for your prayers and concern.

We love you Maeve. We love you Gideon. And we always will. pic.twitter.com/tbJjxP383U

Kennedy III revealed that the day before Maeve and Gideon's tragic disappearance, Maeve had shared the below poem, entitled "When This is Over" by Laura Kelly Fanucci, with her family via email:

The stadium roaring
Each deep breath
A boring Tuesday
Life itself.
When this ends
may we find
that we have become
more like the people
we wanted to be
we were called to be
we hoped to be
and may we stay
that way — better
for each other
because of the worst.

On Instagram, Maeve's uncle Robert F. Kennedy Jr said that some 120 members of the extended Kennedy family have been taking part in a virtual prayer service in memory of Maeve and Gideon:

Kerry Kennedy, Maeve's aunt, said on Instagram that Maeve and Gideon's "light shines bright and we hold them close in our hearts:"

Thank you for your kind words of comfort and prayers for Maeve and Gideon. Their light shines bright and we hold them close in our hearts.

Timothy Shriver, who organized the Kennedy prayer service according to RFK, Jr, shared this picture on his Instagram:

My heart breaks with my cousin Kathleen, with David Townsend, with Maeve’s husband Dave, and with Maeve’s children, Gabriella and Toby as they together face the unspeakably painful loss of Maeve and Gideon. There are no words, only surrender. - The day before she passed, Maeve shared this poem with us. I think of it now as Maeve’s poem. We love you Maeve and Gideon, now and forever.

Maria Shriver shared this picture of the sympathy cards that now adorn the tree outside of the McKean family home in Washington, DC:

This is the tree in front of Maeve and Gideon’s home. It’s filled with cards and notes from neighbors and friends. Wow wow wow! People are so good, so kind, so loving. This made me cry. Never doubt the power of writing a note, sending a card, picking up the phone, decorating a tree. Her husband Dave and their other two children will see this. It will matter. Your actions matter! #movinghumanityforward

Read More: A look at Eunice Kennedy Shriver's lasting legacy on her birthday