Maeve Kennedy Townsend McKean,41 and her son Gideon, 8, were last seen taking a canoe out in Shady Side, Maryland on April 2. The canoe has since been recovered. 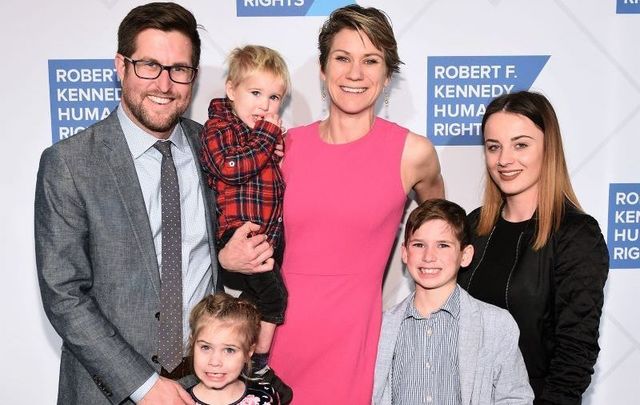 Maeve Kennedy Townsend McKean and her son Gideon have been missing after taking out a canoe on April 2.

Maeve Kennedy Townsend McKean, 40, and her son Gideon Joseph Kennedy McKean, 8, have been missing in Chesapeake Bay, near Annapolis, Maryland, since April 2. The canoe they were last seen has been recovered by search and rescue teams.

“With profound sadness, I share the news that the search for my beloved daughter Maeve and grandson Gideon has turned from rescue to recovery,” Kathleen Kennedy Townsend said in a statement.

David McKean, Maeve’s husband, told The Washington Post that his family was at a waterfront house, owned by his mother-in-law Kathleen Kennedy Townsend, in Shady Side, Maryland on Thursday, April 2.

McKean said after one of the children kicked a ball into the water, Maeve and Gideon “popped into a canoe to chase it down.

“They just got farther out than they could handle and couldn’t get back in.”

The US Coast Guard said in a statement issued on Friday, April 2 that they were continuing to search for “two canoers last sighted ten miles south of Annapolis near Herring Bay, Maryland, Thursday evening.

“The missing canoers have been identified as a 41-year-old woman and her 8-year-old son.

The statement said that the Coast Guard Sector Maryland National Capitol Region command center “received a report from Maryland State Police members that two individuals were seen struggling to return to shore in a canoe near Herring Bay and not seen again by the reporting individual.”

Both a helicopter and boat crew were launched to assist in the search which continued into Friday.

Anne Arundel County Fire Department separately said in a statement: “At 4:30 pm [on April 2], our 911 Center received a call from a concerned citizen. From the Columbia Beach community pier, the caller stated he saw two people in a small canoe or kayak drifting in the bay.

“A water rescue assignment was dispatched to the area bringing marine resources to the area. Firefighters arrived at the pier and confirmed the sighting of two people in a small vessel several miles from the pier drifting south in the Chesapeake Bay. Boats and helicopters began a search of the Chesapeake Bay.

“At 7 pm, the kayak and a paddle were recovered east of Rockhold Creek in Deale, MD by United States Coast Guard and the Fireboat from the City of Annapolis Fire Department. At 7:30 pm, the search was called off due to darkness.”

The statement added that Maryland Natural Resources Police are the lead investigating agency for the incident, and Anne Arundel Country Fire Department Dive Team and Marine Division are currently assisinting in the search.

"An intensive search has been underway since late yesterday which has included teams from Maryland Natural Resources Police, Maryland State Police, US Coast Guard, and the Anne Arundel County Fire Department.

"I reached out to and spoke with Lt. Gov. Townsend this morning and on behalf of the people of Maryland I expressed our most heartfelt sympathies and prayers to her and to her entire family during this difficult time.”

Maeve McKean serves as executive director of the Georgetown University Global Health Initiative. She is the eldest of Kathleen Kennedy Townsend, the former Lieutenant Governor of Maryland, and David Townsend's four daughters.

Kathleen Kennedy Townsend, Maeve McKean's mother, speaking during the memorial service for her father Robert Kennedy marking the 50th anniversary of his assassination in 2018. (Getty Images)

Maeve's maternal grandparents are Senator Robert F. Kennedy and Ethel Skakel. She is a grandniece of President John F. Kennedy.

In a statement shared on April 2, the Kennedy family said: “At this time, our family asks for privacy and that everyone keep Maeve and Gideon in their prayers."