Maeve Kennedy Townsend and her son Gideon are presumed dead at sea. 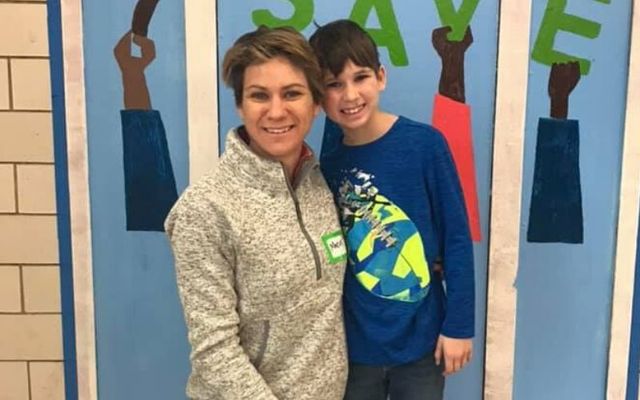 Maeve Kennedy Townsend and her son Gideon were lost at sea aboard a kayak last week after trying to capture a football that had been kicked into the waters of Chesapeake Bay.

A witness on shore saw them struggling to row back in after grabbing the football and called the police. The upturned kayak was later recovered but as yet no sign of the bodies of the mother and son.

Authorities have turned the search for the missing mother and son from a rescue mission to recovery after failing to locate them in more than 48 hours.

David McKean, husband and father penned a remarkable note on Facebook about his two missing loved ones. He explained how his wife and son got into difficulty and summed up how much he would miss them.

Read more: RFK's granddaughter and her son disappear after canoeing in Chesapeake Bay

“I am writing here to address the countless people who have loved my wife Maeve and my son Gideon. As many of you have seen, they went missing in the Chesapeake Bay yesterday afternoon. I tried to reach out personally to as many people as possible before the news became public. However, I know that I was only able to scratch the surface. For those of you learning of this news here, I am sorry. I know Maeve would have loved for you to have gotten a personal call.

"Despite heroic efforts by the Coast Guard and many state and local authorities, the decision has now been made to suspend the active rescue effort. The search that began yesterday afternoon went on throughout the night and continued all day today. It is now dark again. It has been more than 24 hours, and the chances they have survived are impossibly small. It is clear that Maeve and Gideon have passed away.

"The search for their recovery will continue, and I hope that that will be successful.

"I know that people have many questions about what happened as we grapple with this tragedy. Here is what I have come to understand. We were self-quarantining in an empty house owned by Maeve’s mother Kathleen on the Chesapeake Bay, hoping to give our kids more space than we have at home in DC to run around. Gideon and Maeve were playing kickball by the small, shallow cove behind the house, and one of them kicked the ball into the water. The cove is protected, with much calmer wind and water than in the greater Chesapeake. They got into a canoe, intending simply to retrieve the ball, and somehow got pushed by wind or tide into the open bay. About 30 minutes later they were spotted by an onlooker from land, who saw them far out from shore, and called the police. After that last sighting, they were not seen again. The Coast Guard recovered their canoe, which was capsized and miles away, at approximately 6:30 yesterday evening.

"Gideon was 8, but he may as well have been 38. He was deeply compassionate, declining to sing children’s songs if they contained a hint of animals or people being treated cruelly. He hated if I accidentally let a bad word slip. He spent hours upstairs reading, learning everything he could about sports, and trying to decipher the mysteries of the stock market. But he was also incredibly social, athletic, and courageous. For his school picture, he gathered a couple of his many friends to be in the shot with him. He played every sport he could, complaining to me that even though he was often playing six days a week, there was still that seventh day, and why hadn’t I signed him up for something else. And he was brave, leading his friends in games, standing up to people who he thought were wrong (including his parents), and relishing opportunities to go on adventures with friends, even those he’d just met. It is impossible to sum up Gideon here. I am heartbroken to even have to try. I used to marvel at him as a toddler and worry that he was too perfect to exist in this world. It seems to me now that he was.

"Maeve turned 40 in November, and she was my everything. She was my best friend and my soulmate. I have already thought many times over today that I need to remember to tell Maeve about something that’s happening. I am terrified by the idea that this will fade over time. You could hear Maeve’s laugh a block away—and she laughed a lot. She was magical—with endless energy that she would put toward inventing games for our children, taking on another project at work or in our community, and spending time with our friends. There were weeks when we had people over to our house so often that our kids would be confused when we were just having dinner as a family. Maeve once spent the hours before New Year’s Eve organizing a 40-person party at our house, complete with a face painter, during a cross country flight home, while also reading to one of our kids in her lap. She once landed in DC after a 30-hour trip home from Asia, and then took a cab straight to the pool to play with our kids. She did the Peace Corps, she ran the Boston Marathon, she knew how rub Gabriella’s legs when they cramped, and being in her presence somehow allowed you to be a better version of yourself. She was the brightest light I have ever known.

"At seven, Gabriella is heartbroken, but she amazes me with her maturity and grace. Toby is two-and-a-half, so he’s still his usual magical and goofy self. I know soon he will start to ask for Maeve and Gideon. It breaks my heart that he will not get to have them as a mother and brother.

"There has been an overwhelming outpouring of love and support from so many people. Given who Maeve and Gideon were, I am not the least surprised. I am trying my best to respond. Many have asked what they can do. I don’t have any answers for that right now. If people have photos of Maeve or Gideon, those would be great for us to have, especially for me to share with Gabriella and Toby. And feel free to tell stories here. As Gabriella and Toby lay sleeping next to me last night, I promised them that I would do my best to be the parent that Maeve was, and to be the person that Gideon clearly would have grown up to be. Part of that is keeping their memories alive. Any help with that would be welcome."