The PSNI has confirmed that six more arrests were made today in Derry in relation to the 2019 murder of journalist Lyra McKee. 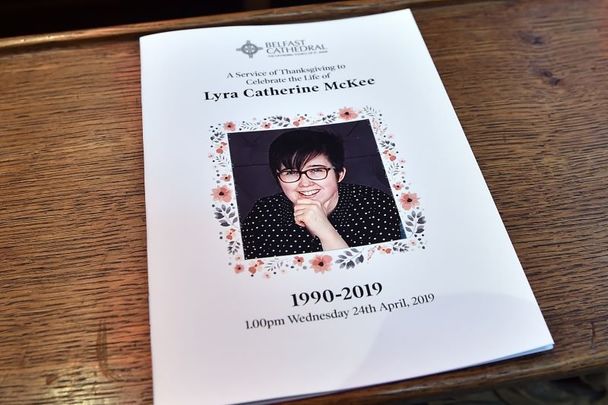 April 24, 2019: The order of service for the funeral for journalist Lyra McKee at St Anne’s Cathedral in Belfast, Northern Ireland. Getty Images

Six men, ranging in age from 20 to 54, have today been arrested in Derry in connection to the murder of journalist Lyra McKee in Derry in April 2019.

“Detectives investigating the murder of journalist Lyra McKee on 18 April 2019 in Derry / Londonderry have arrested five men," the Derry City and Strabane branch of the PSNI confirmed today.

“The men, a 20-year-old, two 21-year-olds, a 41 and 54-year-old, were arrested in the Cityside of Derry / Londonderry this morning (15 March 2022) under the Terrorism Act and have been taken to the Serious Crime Suite at Musgrave Police Station in Belfast where they will be interviewed."

About six hours later, PSNI confirmed that another arrest had been made: “Detectives investigating the murder of journalist Lyra McKee on 18 April 2019 in Derry / Londonderry have made a further arrest today (15 March 2022).

“The 26-year-old man, arrested under the Terrorism Act, has been taken to the Serious Crime Suite at Musgrave Police Station in Belfast where he will be interviewed.

Detectives investigating the murder of Lyra McKee have made a further arrest pic.twitter.com/OX7IvnTeFH

On April 18, 2019, Lyra McKee, a journalist, was shot and killed while observing rioting in the Creggan area of Derry in Northern Ireland. She was 29.

A few days later, on April 23, the Irish News published a statement from the New IRA which said: “On Thursday night following an incursion on the Creggan by heavily armed British crown forces which provoked rioting, the IRA deployed our volunteers to engage.

Today, the campaign said on Twitter that they are still seeking justice for Lyra:

As we are coming up to Easter, the 3rd anniversary of Lyra’s murder. please remember that we still seek Justice for Lyra. pic.twitter.com/ZtSDr3tEfM