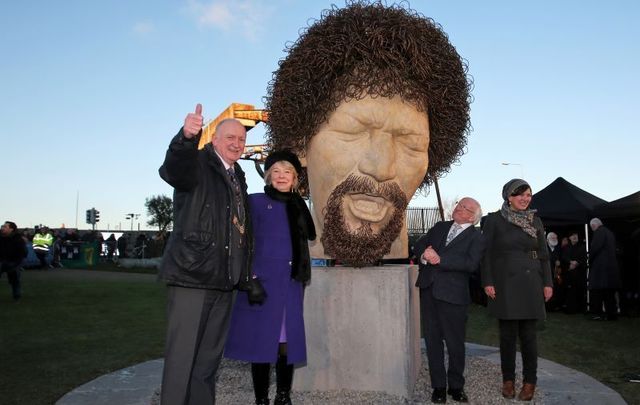 The Luke Kelly statue on Sherrif Street in Dublin City has been vandalized with black paint, prompting outrage from both locals and politicians.

The statue, which was only unveiled earlier this year, was crafted by artist Vera Klute and is one of two statues commissioned in commemoration of the 35th anniversary of the Dublin singer's death.

On February 2, local Councilor Christy Burke, who was instrumental in the commission of the statue, shared a video from the official unveiling:

In response to the recent vandalism, Councilor Burke posted on Facebook on June 25:

It's with great sadness to see the late great Luke Kelly's statue been destroyed by thugs in an area where he was born...

Councilor Burke also added that people should not attempt to clean the statue themselves and that Dublin City Council will be hiring a specialist to repair the damage.

Speaking with The Irish Examiner, Councilor Burke said: "The Luke Kelly statue has been destroyed and vandalized by thugs where they designed dark sunglasses on the face of the great, late Luke Kelly.”

"Now, I'm not pointing the finger at anybody but I'm hoping that CCTV is hoping to pick up the culprit or culprits. I know that the community is outraged."

“I am absolutely outraged; I actually feel so disturbed inside that I am virtually shaking. Really and truly, I never dreamt that this would happen.”

“It is a sad evening at the end of the day but we won’t give up. The graffiti will be removed; the community will stand together, stronger and stronger and I know that they will continue to police the Luke Kelly statue.”

Read More: Two Luke Kelly statues to be unveiled in Dublin this month

Local councilor Anthony Flynn told The Journal: “This is a completely mindless & senseless act of vandalism that the local community are condemning as a whole. The defacing of the Luke Kelly memorial statute mocks the memory of a man who was born just around the corner and gave so much in terms of music. I have liaised with local Gardai and CCTV of the area is being reviewed with the hope of catching the perpetrators.”

He also tweeted a picture of the vandalization and added that the incident has been reported to local gardai.

Absolute ridiculous act of vandalism, mocks the memory of an Inner City icon. Someone had to have seen this being done. Mindless and senseless, plenty of CCTV here. Has been reported to Gardai & @DubCityEnviro pic.twitter.com/Hzb7z6cbe7

Where is the respect for Luke Kelly’s memory? Wanton disfigurement of such a bespoke unique sculpture as this is nothing short of sacrilegious. https://t.co/E6D1Qnevhc

Many other people also shared their disgust about the incident on Twitter:

I’m not going to share the photo, but the person who defaced the Luke Kelly statue is an absolute prick. If you know this person, if you egged them on, or are now laughing at their behaviour, then you too are a complete prick.

Some dick thought it’d be funny to spray glasses onto Luke Kelly on Sheriff st. Locals are pissed- they waited a long time to finally get that statue pic.twitter.com/vh5dSgyv8q

The late great Luke Kelly's statue been destroyed by thugs in an area where he was born and raised.

Surely there's CCTV to identify who these muppets are? pic.twitter.com/20QAAfXee4

Despite not being surprised, I’m outrageously angry about this https://t.co/wMHEKU9FcO

To the gobshite who decided to vandalise the statue of Luke Kelly by Sherriffer.
1, you're a twat
2, you have no imagination whatsoever
3, you can't draw to save your life
4, cop onto yourself