The prolific Ulster Volunteer Force gunman was named by his wife in an anonymous phone call to the police about the Loughinisland massacre. 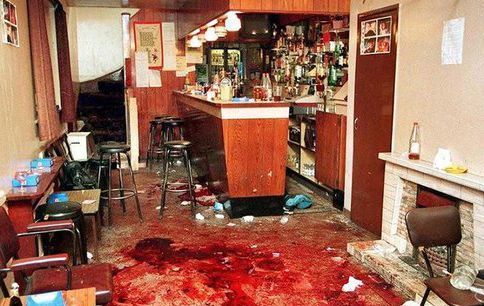 A new Loughinisland documentary claims that the wife of one of the killers handed his name over to police not long after the massacre took place.

The wife of a leading loyalist, thought to be an Ulster Volunteer Force gunman and one of the killers in the Loughinisland massacre, called the police anonymously to name him shortly after the atrocity, the documentary “No Stone Unturned” claims.

Police are said to have recognized the woman during two confidential phone calls because she worked at the time in a station of the RUC (Royal Irish Constabulary).

The Loughinisland massacre took place on June 18, 1994, in the small village of Loughinisland, County Down, Northern Ireland. Members of the Ulster Volunteer Force (UVF), a loyalist paramilitary group, burst into a pub with assault rifles and fired on the customers, killing six civilians and wounding five.

The pub was targeted because it was frequented mainly by Catholics and was crowded at the time with people watching the Republic of Ireland team playing in the 1994 FIFA World Cup.

The six victims of the Loughinisland massacre, explored in new documentary "No Stone Unturned."

The massacre occurred at a critical time in the Irish peace process just as the IRA were deciding whether or not to call a ceasefire.

In a 2016 report of the massacre, Northern Ireland Police Ombudsman Dr. Michael Maguire said he had no hesitation in determining collusion between police, security services, and loyalist paramilitaries happened at the highest levels in relation to the massacre and and the leading loyalist in question was named as “Person A.”

This long-awaited documentary, created by Oscar-winning filmmaker Alex Gibney, identifies Person A and his wife, who is also named has having written an anonymous letter to a former SDLP councillor in which she names three men allegedly involved in the atrocity, implicating herself in its planning as well.

The “Person A” named was arrested in August 1994 just several months after the crime but was released again without charge. His wife was also arrested the following year but she too was released, despite admitting to the police that she had made the anonymous calls naming her husband and had penned the anonymous letter.

The couple are still married and “No Stone Unturned” tracks them down to their family business.

"No Stone Unturned" goes on general release in Ireland on Friday, November 10. It received its world premiere at the New York Film Festival last September.

Are you interested in viewing "No Stone Unturned?" Why do you think it has fallen on documentary makers to reveal these names? Let us know your thoughts in the comments section, below.