James McClean has called on the English football authorities to take action after he says he was targeted by sectarian abuse during a match between Sunderland and Wigan Athletic. 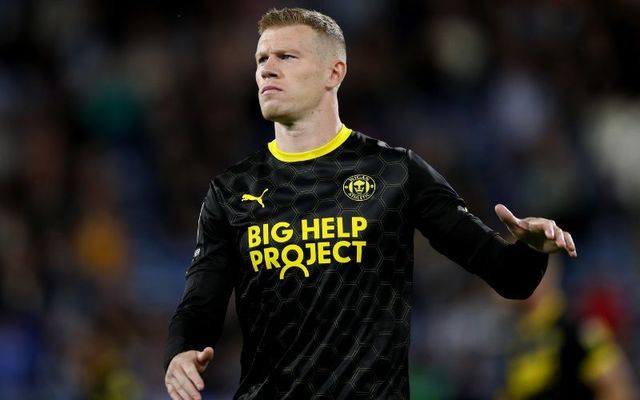 Wigan footballer James McClean appears to have been the target of sectarian abuse that was chanted during a match against Sunderland on October 15.

McClean, a native of Derry, said in a lengthy Instagram post on October 16 that he and his family "have been on the end of sickening abuse since Nov 2012."

"Now everyone who attended the game would have heard this loud and clear including the referee, match officials, and other officials!" he noted.

McClean added that Sunderland had displayed a tribute to former player Niall Quinn, who scored 21 goals for Ireland.

"[You] couldn’t make the stupidity up," McClean wrote.

He continued: "I should not have to report every single incident when clearly they can all hear what I hear and they should be doing their job by taking action!

"I would be lying if a [I] was to say I expect anything to done about this by the FA, @efl [English Football League] (history shows this) but here is ANOTHER CHANCE sure and I certainly don’t expect any action to be taken by @sunderlandafcofficial themselves giving they did nothing when I was their player."

According to the Irish Examiner, the FA has responded with a statement saying: "We strongly condemn all forms of discriminatory and offensive chanting.

"Any participants or fans who believe that they have been the subject of, or witness to, discrimination are encouraged to report it through the correct channels: The FA, the relevant club, or via our partners at Kick it Out.

"The FA looks into any alleged discriminatory language or behaviour that is reported to us and we work closely with the clubs and relevant authorities to ensure appropriate action is taken."

"We are aware of the alleged chanting in question on Saturday 15 October 2022, and we will be investigating to establish if the language used was discriminatory."

Sunderland FC also responded on Monday, saying: "Sunderland AFC has a zero-tolerance policy against all forms of discrimination.

"The Club is committed to providing an inclusive, family-friendly environment at the Stadium of Light and strongly condemns any supporter found to be engaging in any form of discriminatory behavior.

"Whilst the majority of fans behave impeccably when supporting SAFC, there have been multiple incidents during the 2022-23 season that are unacceptable and have resulted in ejection, stadium bans and criminal investigations."

Talal Al Hammad, the chairman of Wigan FC, said on Monday that "as a club, we are doing everything in our power to stop this from happening however more importantly as mature adults, this should not be happening."

McClean, who refuses to wear a poppy to mark Remembrance Sunday in the UK because of what it symbolizes in his native Derry, has received sectarian abuse throughout his footballing career.

In 2020, McClean was fined after posting a picture of himself wearing a balaclava on his Instagram account which appeared to reference the IRA. He apologized "unreservedly" afterward.