The image, which appeared on McClean's story, included the caption "today's school lesson - history" and appears to be a reference to the IRA. 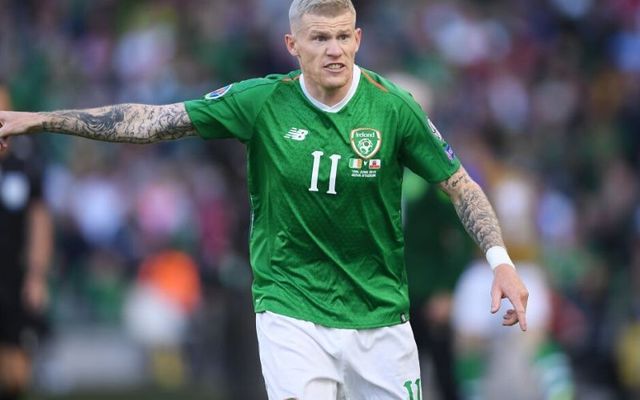 James McClean has been docked two weeks' wages for the post. Getty

Irish soccer player James McClean has landed himself in hot water by posting a picture of himself wearing a balaclava on his Instagram account which appeared to reference the IRA.

McClean was fined two weeks' wages by his club, Stoke City, and forced to delete his Instagram account for posting an image of him wearing a balaclava while home-schooling his children.

The image, which appeared on McClean's story, included the caption "today's school lesson - history" and appears to be a reference to the IRA.

During the Troubles, balaclavas were often associated with IRA terrorists.

He accepted that the post was offensive and apologized "unreservedly" for it.

"I never wanted to cause any offense but I now realize that I did so and for that, I apologize unreservedly. I have spoken to the Club and will be deleting my Instagram account.”

McClean, who is from a Republican area of Derry, has never shied away from his Irish roots.

He sports a "you are now entering free Derry" tattoo on his thigh and has consistently refused to wear the remembrance poppy since it commemorates soldiers who served in Northern Ireland, including those who killed 14 protestors on Bloody Sunday.

Six of the dead protestors came from the Creggan Estate where McClean grew up.

McClean receives his fair share of sectarian abuse for his beliefs.

He is booed at almost every ground in England and this booing is ramped up on Remembrance Sunday in November when soccer players commonly wear a commemorative poppy.

Supporters aim "no surrender to the IRA" chants and other sectarian diatribes at McClean every November.

Kick It Out, an organization tackling racism and discrimination in soccer, defended McClean on numerous occasions this season against the "disgraceful anti-Irish and sectarian abuse" he receives.

Last year, McClean received a death threat on his birthday which referred to Irish people as "a race of subhuman parasites" and said "happy birthday and die" to the Irish player.

McClean's recent Instagram post provoked further outrage among the cohort of British soccer fans who already think him a disgrace for his refusal to wear the poppy and for being a "proud Fenian."