Middle school bullies tortured Irish American teen Liam O'Brien within inches of his life. His parents are speaking out after internal school investigation found no evidence. 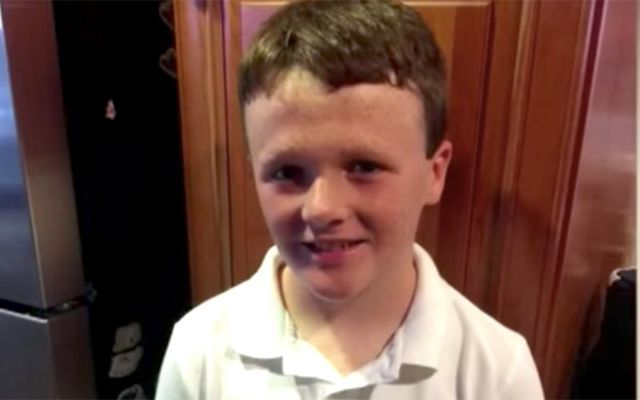 Pre-teen bullies woefully lacking in humanity have claimed another innocent victim who is barely able to function after repeated verbal and physical attacks.

However, the child’s parents are determined that their son’s anguish will shine a spotlight on a nationwide bullying epidemic that is crippling those caught in its trap.

Liam O’Brien, 13, has a family background that would seem to mark him as the ultimate cool kid.  His grandfather is Leo O’Brien, the Dublin-born, New York-based thoroughbred horse trainer whose horses have won millions in purse money and competed in Triple Crown and Breeders’ Cup races. And his uncle-in-law is the Hall of Fame jockey John Velazquez, winner of 13 Breeders’ Cup races and four Triple Crowns, including this year’s Kentucky Derby.

But Liam, the second child of Leo O’Brien’s son Keith and his wife Deirdre Fell O’Brien, has suffered horribly in the last year thanks to young thugs on his school’s soccer team who made his life a living hell because they reckoned he wasn’t good enough to be among them.

Liam is currently receiving treatment for depression and an eating disorder at an in-patient hospital in Princeton, New Jersey, and his devastated parents are determined that their eldest son’s plight will not go unnoticed.

“Liam is the center of our family. We need him home,” a tearful Deirdre O’Brien told the Irish Voice.

“So many people have reached out to us and said that this has happened to their children. We feel lucky that we still have Liam with us, that it didn’t end in a tragic way.”

O’Brien, a registered nurse who works at Memorial Sloan Kettering in Manhattan, wrote a heartbreaking account of Liam’s school troubles on her Facebook page last week which has gone viral. Several local networks, including WCBS and WNBC, highlighted her family’s grief, as did Us Weekly online, but the highly regarded school district on Long Island where Liam is a student said an investigation didn’t turn up conclusive evidence that he was bullied.

Liam with his grandfather, Leo O'Brien

Liam was a seventh grader at the middle school in Garden City when his nightmare began. His passion for years was soccer. An excellent player who loves Manchester United, he played on a local travel team for many years. When he became eligible for the highly regarded middle school’s team he tried out and won a coveted slot.

Two fellow players, though, weren’t happy that Liam made the cut. “They really went at him,” O’Brien said. “They kept asking how he got on the team, that he sucked, and that he wasn’t good enough.”

Liam, a kind and sensitive soul with a big Irish freckled face, kept his anguish to himself – for the whole of seventh grade. His parents noticed a change in their son. Liam became quieter, and he eventually surrendered his iPhone because it caused “too much drama.”

Spending time with family became Liam’s favorite thing to do. “I was happy but I kept asking if anything happened and was everything ok? He said he was fine. He played soccer in the spring with his travel team. Soccer was the one thing that remained consistent,” O’Brien wrote on her Facebook page.

“He played every day. He carried a soccer ball everywhere we went. I kept asking, ‘Don’t you want to go hang out, make plans with friends?’ He said, ‘No I’m fine.’”

But Liam wasn’t fine. Summer of 2017 came and he made another soccer team, but he soon stopped playing. He spent part of the summer with his father in Saratoga Springs, New York, training horses with his grandfather Leo.

Keith O’Brien noticed that his son wasn’t eating as much as he used to. Liam, a tall and extremely fit child, had lost 10 pounds and was eating only one meal a day. Deirdre O’Brien brought him to his pediatrician, and Liam was immediately sent to Cohen’s Children’s Medical Center to receive treatment for an eating disorder.

But Liam was anxious to return to eighth grade at Garden City Middle School, and promised his parents that he would resume eating if he could check out of Cohen’s.

“I went to bat for him. I thought he really needs to start school with his friends. I went into Garden City Middle School on the first day and met with guidance,” O’Brien wrote on Facebook.

“I met with the nurses and made them aware of what was going on with Liam. I was told staff would be aware and he would be safe.”

It was only a few days into eighth grade last month before the O’Briens discovered how unsafe their already fragile son was in his school environment. On his birthday, Liam came home with half of his face severely reddened thanks to a student bashing him into a gym locker. Liam, never wanting to assign blame, said it was an accident, but his lack of food intake and obvious unhappiness with his life indicated otherwise.

“That Monday he didn’t go to school. We sat at the kitchen table and we cried and I said, ‘Please tell me what happened.’ He finally couldn’t hold it in anymore,” O’Brien wrote on Facebook.

“He told me he was bullied terribly in seventh grade. It started when he made the soccer team.  Two kids told him he sucked and shouldn’t have made the team. There were unnecessary pushes and kicks. He was told he was weird, he was fat, his freckles were weird, his eyebrows were weird. They used horrible language and called him nasty words. I asked him how often it happened. He looked at me crying and said, ‘Every day, Mom.’”

No one saw the perpetrator shove Liam into the gym locker, and no one has come forth about the bullying he’s endured. Garden City school administrators conducted an investigation after Keith and Deirdre O’Brien filed a complaint. Last week, administrators said there was no conclusive evidence to indicate Liam was bullied.

“My son came home and told me he was pushed into a locker. His face was all red. Who are you going to believe? The school said there was no one there to witness it,” Deirdre O’Brien said.

“The school had the nerve to say to us that Liam didn’t exhibit the behavior of someone who was just assaulted. And I thought to myself, what was he supposed to do? What kind of behavior would that be? He was so scared.”

Liam O’Brien, instead of enjoying eighth grade, is being treated in Princeton, New Jersey for depression and an eating disorder. At one point his condition was so dire that he required a feeding tube.

Visiting hours are only 90 minutes a day, but longer on weekends. The O’Brien family has worked their schedule around the visits. Liam is doing better, but he’s still overwhelmed by the trauma he’s suffered, and there’s no timeframe for when he’ll be home.

“Liam is really suffering with this. He calls me at night and he cries. He says he’s not strong, but I tell him he’s the strongest person I know. I tell him that everyone is behind him,” his mother says.

Liam (second from right) with his parents and siblings.

Liam is the second of Keith and Deirdre O’Brien’s five children. Darby is the eldest at 14, then there’s Liam, Jacinta, 11, Muireann, 9, and John Joe, 6. Liam’s siblings have received nothing but support from their friends in the Garden City school district.

“Everyone has been great to them. We’ve never had a problem,” says Deirdre O’Brien, whose parents are natives of counties Kerry and Limerick.

“The school has closed their investigation, but this is not over. I want Liam’s story to be heard,” she wrote on her Facebook page.

Her hashtag #westandwithliam, has been shared hundreds of times on social media, and residents of Garden City and beyond have also shown support by decorating their trees. The O’Briens have retained legal counsel to help them determine what their next steps will be.

The number one goal remains getting Liam home and back in school – the timeframe, given his condition, is uncertain – and to prevent other families from having to suffer through the same tragedy.

“Parents need to talk to their kids and make sure they know how damaging words can be,” O’Brien says.