Ireland can only stand idly by, for the most part, constrained by neutrality from aiding Ukraine in this war for the ages. 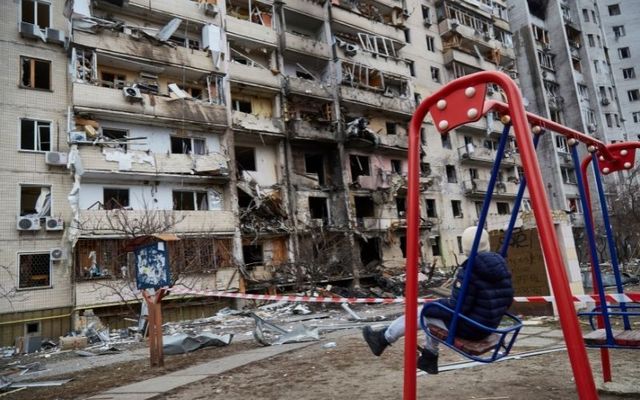 A child on a swing outside a residential building damaged by a missile on February 25, 2022, in Kyiv, Ukraine. Getty

"The hottest place in hell is reserved for those who remain neutral at a time of moral crisis,” Dante wrote, and Ireland must be approaching that fiery cauldron as we write.

The war in Ukraine has seared the soul of billions worldwide as a jackboot Russian army seeks to bring down a democratically elected government. Ireland, alas, can only stand idly by, for the most part, constrained by neutrality from aiding Ukraine in this war for the ages.

These are grave times and Ireland has no business being on the sidelines.

Comparisons of Hitler with Vladimir Putin are unavoidable. Both are small, aggrieved men with no democratic mandate, intent on ending the ordered world for some messianic vision of their own. It is up to every other country in Europe and in the U.S. to stop them.

Yet it seems while almost every other country in Europe is pitching in, fully aware of the potential for disaster on their doorstep, Ireland is clinging to an outmoded policy that may have worked in World War II but which is failing abjectly now.

The stakes are sky-high.  If Hitler had the atomic bomb he would have used it without hesitation. America had it and used it.

Putin has missiles far more deadly than anything ever used in war before. Last weekend he intimated he might consider using them in some instances.

If that does not shatter the Irish neutrality policy, we know of nothing that can. This is no time to be on the sideline pretending a policy of neutrality can work.

In the face of such aggression, it is well past time that Ireland ended its neutrality stance and sided with Ukraine and with the many countries who have flocked to Ukraine’s side.

It is noticeable that this is not the first time the Irish have been found wanting.

Ireland’s neutrality has cost its reputation dear, most notably at the end of World War II when Taoiseach Eamon de Valera went to the German Embassy and expressed sympathy at the death of Herr Hitler in May 1945.

Not only that, but a senior official representing the then Irish president, Douglas Hyde, also hurried to give his respect.

As a diplomatic blunder, it was a doozy and one that has haunted Ireland since. Are the Irish now in danger of committing the same massive error in judgment by holding fast to neutrality in Ukraine?

The reality is that standing by while Ukraine is dismembered is an equal act of folly and disgrace. And the facts are that Irish neutrality is far more a malleable concept than is generally envisaged.

U.S. soldiers on their way to the Middle East landed warplanes in Shannon Airport as part of the itinerary, a clear break in neutrality protocol.  Rendition flights and secret CIA aircraft bringing key suspects to black side prisons also passed through.

Right now Ireland is powerless to offer any significant aid to Ukraine in its hour of need. The Ukrainian government has been crying out for weapons and armor.

Ireland has agreed to send non-lethal medical equipment and some body armor. It is barely a pebble in a stream in terms of what is needed.

The solidarity of nations, joined together to stop Putin’s megalomaniac plans to reinstall himself as the czar of Eastern Europe and king of all he surveys, is the only way to thwart his madness. Ireland should be one of that cohort, not outside looking in.