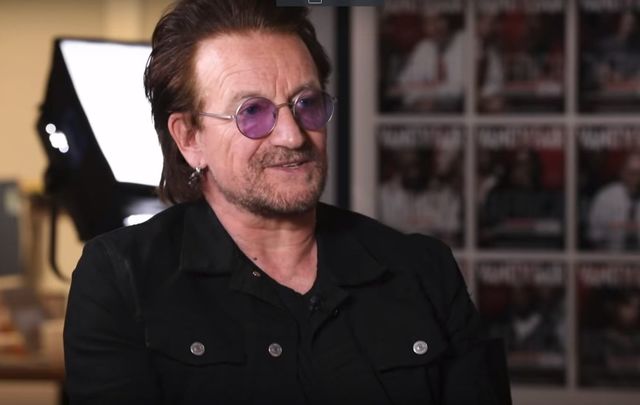 U2 frontman Bono, speaking with the Today show on his love of books and reading. YouTube

Today show co-host Jenna Bush Hager nabbed her dad’s old pal Bono for a sit down about books last week. It comes as no surprise that the U2 frontman loves to read

The 59-year-old Dubliner’s childhood consisted of Moby Dick and Narnia and many others.  “I stole books. I’m probably not allowed to say that,” he laughed.

Jenna wondered if Bono’s folks read or sang to him.  He laughed at the thought.

“Ah no Jen, that wouldn’t have happened.  Growing up in Dublin my dad played opera, and so we had deafening music.  Reading wasn’t such a big thing,” he said.

“I developed my own passions for reading in my teenage years.  I read a lot about America – it’s part of the reason why I look up to America.”

John Steinbeck was a favorite, as were beat writers Jack Kerouac and the poet Allen Ginsberg.   “When you are busy, poetry is just powerful,” Bono offered.

Reading to his two now-grown daughters Jordan and Eve when they were littluns was a favorite pastime for Bono and his wife Ali – with Harry Potter and The Bible ranking as top choices.

Jenna recalled that Bono brought a tear to her eye with a gift her gave her for her firstborn daughter Mila.  It was a copy of his recreation of Peter and the Wolf with his pal Gavin Friday. The inscription was sweet: “Welcome to the world. There’s a lot of work for you to do, but not just yet.”

In other Bono-related news, his son Eli, an aspiring rock star, just landed a prime gig for the summer. He and his band Inhaler will be the opening act for Noel Gallagher’s band High Flying Birds. Gallagher has a huge following as he was one half of Oasis with his brother Liam.

He and Bono are good pals, but Noel swears that’s not the reason why Inhaler will be joining him on the road.

“His son’s got something. Eli has been getting it together for a few years and has gone through the stages most young people do,” Gallagher told BBC Radio 2.

Read more: U2’s Adam Clayton on fame, his battle with alcohol and the demons that lurk