The sooner Enda Kenny steps down the better

The last thing Ireland needs right now is a faltering government, with or without a new leader. Or an election. 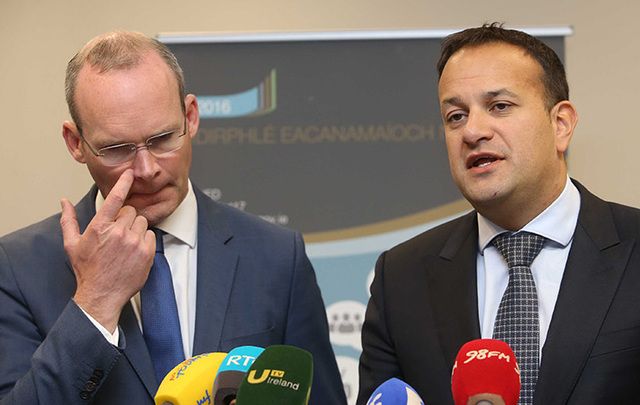 Simon Coveney and Leo Varadkar at an event in Dublin last year. RollingNews

The  last thing Ireland needs right now is a faltering government, with or without a new leader.  Or an election.  Yet one of those two outcomes, possibly both, is what now lies ahead of us as Enda Kenny's final days as taoiseach play out.

What Ireland really needs over the coming months is a stable government able to make tough decisions and provide strong leadership.  We need that for two reasons.

Within a few weeks British Prime Minister Theresa May will trigger Article 50, starting the process that will take the U.K. out of the EU.  At that point the hard bargaining between Britain and Europe will start and the reality of what lies ahead for Ireland will soon become apparent.  We're then going to find out the real value -- if any -- of the assurances given to us by both the U.K. and the EU recently, assurances that were probably little more than wishful thinking.

The next few months should also bring a clearer picture of Donald Trump's new deal to get American companies to invest at home rather than abroad, not least in Ireland.  Despite a few reassuring things some of the Trump team have said about Ireland, the reality is that we are a very small part of a very big picture and we could easily become unintended collateral damage as the president's policy on bringing jobs home is implemented.

For both of those reasons -- which together add up to the biggest challenge Ireland has faced in decades -- the next few months would be a disastrous time to have an unstable government here.  Or to have an election and the weeks of stasis and uncertainty that would bring. However, thanks to the mess the present minority government has got itself into, that is precisely what is coming down the tracks.

The timing simply could not be worse.  And Kenny, and some of his ministers, have only themselves to blame.

It was written all over their faces last week as the McCabe crisis engulfed them in the Dail.  The more they tried to explain, the more their credibility ebbed away. It was beyond embarrassing at times.

It's not that Kenny has done anything wrong himself, as far as we know.  But his inept handling of the revelations about the smearing of garda whistleblower Maurice McCabe with a false sex abuse file has destroyed his authority.  There is now a general acceptance, both in Fine Gael and in the country at large, that his time as taoiseach is through and that he has to go.

He is expected to reveal a timescale for his departure at the Fine Gael parliamentary party meeting to be held this Wednesday.  Failure to do so may prompt a vote of no confidence.

Last weekend he said he would "address the issue" of the leadership at Wednesday's meeting, which is not the same as saying he is about to go.  But the reality is that on this occasion there can be no playing for time, no Lazarus-like survival.  It's over, and he's been around long enough in politics to know that.

There has been some talk in Fine Gael of doing the decent think and allowing him a lap of honor, much like Bertie Ahern got.  This would see him staying on as taoiseach long enough to present the shamrock to President Trump in the White House next month. It has also been suggested that he might remain until May, when he would become the longest serving taoiseach in Fine Gael history.

There has even been the idea -- floated by Kenny's most loyal supporters -- that he should remain as taoiseach until later this year to allow him to use the contacts he has with other EU leaders to get the best possible start for Ireland in the Brexit negotiations that are about to get underway.

That last option would fit with the timeline implicit in his assertion some time ago that he would not lead Fine Gael into the next election.  That was taken as meaning then that he would step down as Taoiseach at the end of this year or some time in 2018, giving his successor time to make an impact before an election.

But that was then and this is now.  Last week's fiasco in the Dail has finished any chance of him staying on more than a very limited time, weeks rather than months.  The two candidates likely to succeed him, Leo Varadkar and Simon Coveney, have already made that clear in statements in the last few days.

Varadkar's unusual surname comes from his Indian father, a doctor who was a popular GP in Dublin for many years until his retirement; his mother is Irish. Varadkar, 38, is also a doctor, was born here, and has been active in Fine Gael since his college days.

He is marginally the front runner, largely because of his engaging personality and a reputation for speaking his mind whether the party likes it or not. Currently the minister for social protection (welfare), he is a former minister for health.  His ministerial career to date has been competent rather than distinguished. Although a doctor himself, he ran into the same intractable problems as minister for health as his predecessors in that department.

Despite announcing in 2015 that he is gay, he is very popular in the once highly conservative Fine Gael party, a measure both of his people skills and the changing face of Ireland.

Coveney, 44, is from old Fine Gael stock; a more reserved, conventional politician, he is seen as a highly effective minister.  He is currently the minister for housing, tackling the homelessness crisis which has lingered on after the crash, no easy task.

A steady pair of hands with a deliberate, analytical approach, he is a former minister for agriculture.  His more intellectual style possibly gives him the edge for the position as taoiseach, particularly given the complexity of the upcoming challenges the country faces.

That may not be enough, however, to enable him to outrun Varadkar.  Two recent opinion polls put Fine Gael way behind Fianna Fail, despite that party wrecking the country in the boom.  Nervous Fine Gael backbench politicians may feel the more popular Varadkar will give their party the best chance of turning this around in the next election and saving their seats in the Dail.

Either Varadkar or Coveney would make a good leader and probably a far better one than Kenny, a decent man but sadly out of his depth as taoiseach.  Either of them taking over would also mark a generational shift in politics here and would probably mean a Cabinet reshuffle that could see a lot of the old guard (like Finance Minister Michael Noonan) finally being retired off.

But the big unknown in all this is Fianna Fail, which can bring this minority government down at any time by ending the deal under which it supports it in Dail votes.  It's an intriguing situation.

Fianna Fail is rising in the polls as disillusion with the present government mounts.  But it is still some way off where it needs to be to lead the next government, which will be another coalition.

The problem for Fianna Fail is that the longer it waits, the better chance a new young Fine Gael taoiseach will have of establishing himself and revitalizing the party.  The contrast with the Fianna Fail leader, Micheal Martin, who is the older generation, might not look good.

And you can be sure a new young Fine Gael taoiseach will reinforce the party message that it is much too early for the Irish people to forgive Fianna Fail, including Martin, for bankrupting the country.

At the height of the crisis last week when the taoiseach was caught by reporters on his way into an event, his reply to questions about the McCabe issue was that he "would talk to Micheal Martin in the morning."  For people in Fine Gael that summed up how much his authority had been undermined and how demeaning the arrangement with Fianna Fail had become for the party.

To reverse that situation, it’s possible a new Fine Gael leader might decide to go for a snap election despite being behind in the polls.  If it can be done quickly, that might be the best thing for the country.

And for that reason, the sooner Kenny goes the better.