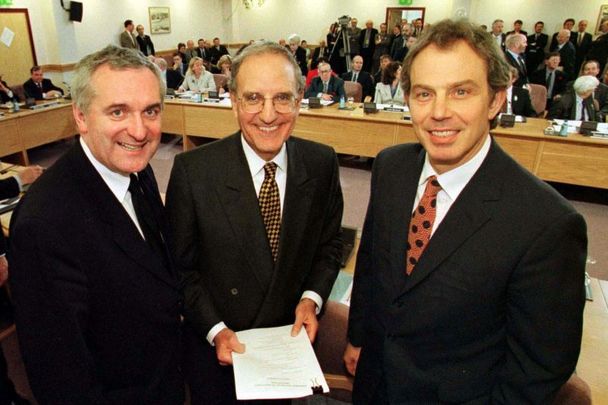 The grand marshal for the 2016 New York City St. Patrick’s Day parade is former U.S. Senator George Mitchell, the Irish Voice has learned. The honor is especially valued on the 100th anniversary of Ireland’s 1916 Easter Rising.

Mitchell will be unveiled as the grand marshal on Monday, January 11 at an event hosted by the parade’s board of directors at the New York Athletic Club.

Mitchell was the first U.S. special envoy to Northern Ireland, appointed by President Bill Clinton in 1995, and chaired the all-party talks that led to the signing of the Good Friday Agreement in April of 1998. Mitchell, 82, was widely respected by Nationalists and Unionists alike, and in 1999 he wrote a book “Making Peace” about his groundbreaking work which secured the peace deal.

Mitchell has served in a variety of capacities since completing 15 years in the Senate, 1980-1995, the last six of which were spent as majority leader. In 2009 he was appointed by President Obama as U.S. special envoy for the Middle East – he served until 2011 – and he also led the 2006-’07 investigation into the use of performance enhancing drugs in Major League Baseball. He is a Maronite or Eastern Rite Catholic by religion.

Sources told the “Irish Voice” that Cardinal Timothy Dolan, last year’s grand marshal, fully approves of Mitchell’s selection and will soon host a reception for Mitchell and members of the board.

Plans for this year’s parade, which will also mark the 100th anniversary of the Easter Rising in Ireland, have continued apace despite the lingering turmoil between the board and John Dunleavy, who until November chaired the board’s Parade and Celebration Committee.

Last October, Dunleavy filed a lawsuit in the Bronx against board chairman Dr. John Lahey, alleging that Lahey attempted to “hijack” the parade away from its 180 affiliated organizations, and that he illegally worked with another board member, NBC executive Frank Comerford, to keep the parade’s broadcast rights with WNBC.

Dunleavy was demoted from his role as the parade’s chief spokesperson and organizer last June after a board meeting that unanimously elected Lahey as chairman with responsibility for acting on behalf of the parade. Dunleavy, a long-time opponent of gay groups marching with banners in the parade, retained his title as chairman of the Parade and Celebration Committee, and continues to hold a seat on the board of directors.

Last year’s selection of Cardinal Dolan as grand marshal was a significant turning point in the history of the parade. Dolan led the march that for the first time also included a gay group, OUT@NBCUniversal, walking up Fifth Avenue behind its own banner, though the issue of gays openly marching in the parade still simmered because the event did not include an Irish LGBT group.

This year, OUT@NBCUniversal will be joined by an Irish gay group marching with a banner, the Queens-based Lavender and Green Alliance co-founded by long-time activists Brendan Fay and Kathleen Walsh D’Arcy. Lavender and Green hosts the annual St. Pat’s for All march in Sunnyside/Woodside which began in 2000 in response to the group’s exclusion from the Fifth Avenue march.