Irish Justice Seamus Woulfe is refusing to resign from his role after his involvement with Golfgate, but has signaled that he is open to facing sanctions. 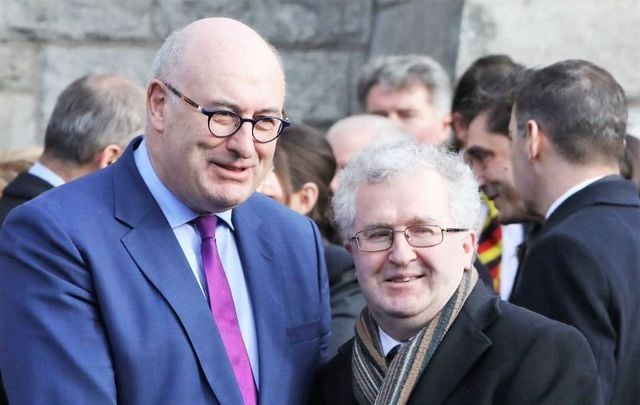 Justice Seamus Woulfe (right) pictured with Phil Hogan, who resigned from his role as EU Commissioner for Trade after Golfgate. RollingNews.ie

Ireland this week has its own comparison to President Donald Trump’s refusal to accept his defeat and prepare to leave the White House.

All the senior judges in Ireland want to fire Seamus Woulfe, their newest recruit to the Irish Supreme Court, but he is refusing to go even after the chief justice told him to resign.

At issue is Woulfe’s handling of the controversy following his attendance at the infamous “golfgate” dinner in Connemara which breached anti-Covid rules.

There were calls for Woulfe, recently appointed to the Supreme Court, to also resign, but he refused.

She reported that he erred in attending the dinner but there were not sufficient grounds to warrant his resignation.

In follow-up exchanges, other Supreme Court judges were dissatisfied with the way Woulfe handled the controversy, and last week, Clarke asked him to resign.

Clarke said in a letter that it was the “unanimous view” of all members of the Supreme Court that Woulfe had caused “significant and irreparable” damage to the court by how he handled the matter.

Woulfe refused on Monday of this week to resign and said he would be willing to accept sanctions that would include donating three months of his salary to charity, not sit as a Supreme Court judge until February 2021, and to sit as a High Court judge to help out that court.

He said he did not think any of the reasons proffered for his resignation “remotely constitute substantial reasons or grounds for my resignation, let alone amount to judicial misconduct.”

In a brief statement on Monday night, the government said the attorney general has been asked to advise the Taoiseach and ministers on the matter and that it would be "avoiding inappropriate public comment."

Former District Court Judge Michael Pattwell told RTE on Tuesday that the chief justice and the Supreme Court had “backed themselves into a corner.” He said there was no law to back the stance taken by the other members of the Supreme Court.

Former government minister Shane Ross also said that the Supreme Court had backed itself into a corner. He said Susan Denham had been asked to conduct an investigation, but her recommendation had been ignored by Clarke.