United Ireland closer than ever this Easter Rising anniversary

The extraordinary fact is a united Ireland is closer than ever, something we might never have considered while celebrating the Rising centenary. 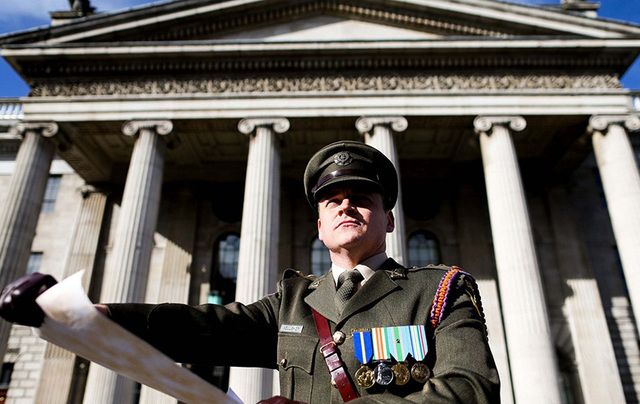 An actor reads a copy of the Proclamation of Independence outside the GPO in 2016.

One hundred and one years ago this week the Easter Rising began. We still live with the upshot of that uprising. Indeed, one could argue this year it is more significant than ever.

With the remnants of the British Empire tearing themselves apart over Brexit, the perspective of those revolutionaries who were first to pull the thread that un-knit the empire is vital.

Last year saw an outpouring of emotion and reflection on why the Rising happened and what it meant.

The Irish state rose magnificently to the occasion on Easter Sunday 2016 with a massive commemoration through the streets of Dublin, while smaller events were held throughout the country.

Every town and village, it seemed, had some connection, no matter how remote, to the men and women who were “out” in 1916 and celebrated it.

For the next generation of Irish, it was an educational and emotional introduction into how they became who they are, citizens of a proud Republic, albeit one with unfinished business in Northern Ireland.

Last year, on a bright, warm Sunday morning with blue skies above in Dublin, the hopes and dreams of the Rising patriots were remembered. The serried ranks of Irish soldiers marched past the General Post Office as the leaders of the country stood and took the salute in honor of those men.

The men and women of 1916 would likely have approved. Even among the most cynical of them there would be a pleasant surprise at what their Rising, which began with no hope of victory, had achieved.

Indeed, it has become the shining moment in a nation's history, the act from which all others flow.

But what no one could predict amid the flag-waving and cheers last year was how far the united Ireland agenda would move forward in just 12 months after decades of stasis. The extraordinary fact is a united Ireland is closer than ever following events in the intervening 12 months.

The success of Brexit was a bolt from the blue, but the immediate impact is a rise in English nationalism and a clear disdain for the worries of Scotland and Northern Ireland where the vote was heavily anti-Brexit.

Having succeeded in shooting themselves in the foot, the British and their prime minister, Theresa May, commenced to insert a stiletto into the Scots, telling them to buzz off with their dreams of an independent Scotland.

Scottish First Minister Nicola Sturgeon responded with the threat of a new vote on leaving the United Kingdom. If that passes the U.K. falls asunder and is no more.

Quite where that leaves Northern Ireland is unknowable. In the recent Assembly elections Sinn Fein came within a hairsbreadth of becoming the largest party. Demographics has determined there will be a nationalist voting majority sooner rather than later.

If the Scots have walked by then, the likelihood of Northern Ireland doing the same is very real by a legitimate vote of the majority.

Of course, the unionists will not want such a scenario, but if an EU package is dangled in front of them the famously hard-headed northerners, essentially abandoned by the English, will surely take note.

We live in interesting times. Happy Easter to all.