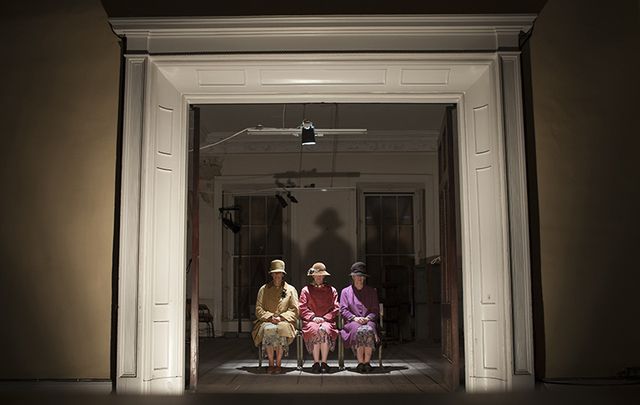 The U.S. premiere of Beckett in the City: The Women Speak, plays from September 20 – October 1. IAC

“First up in theater is the U.S. premiere of Beckett in the City: The Women Speak, from Dublin’s acclaimed Company SJ (from September 20 – October 1) a site-specific production that will fill the walls of the old piano factory space at 508 West 52nd Street with the voices of Beckett’s women.”

In conjunction with the production, the IAC will present a photographic exhibition featuring John Minihan’s world famous portraits of Samuel Beckett and some of the artists he inspired (opening September 11).

Director-designer Sara Jane Scaife of Company SJ will also offer a master class and workshop, Sculpting Beckett in Space, on September 27, which will focus on Beckett’s use of the body as sculpture.

Another show Connelly is hailing is the highly anticipated return of Irish-French chanteuse Camille O’Sullivan, this time performing a tribute to the legendary Belgian singer-songwriter Jacques Brel.

“I believe this will be our third or fourth project with her and I’m very proud the IAC is becoming her New York home,” Connelly says.

“The idea is that the IAC is a home for New York-based artists to welcome and present their work and the work they identify from Ireland. We try to help empower them to go out and create a platform that deepens the breadth of the work our audiences experience.”

This year the IAC will launch the first international tour from its Masters in Collaboration series on October 13, this one featuring Liam O Maonlai and Cassandra Wilson, an unlikely and yet seamless musical paring that was one of the highlights of their recent Ireland Rising event at Symphony Space.

The arts center will also be a forum for remarkable new debates. Movements: A Conversation with Ambassador Samantha Power will be first in a new series of thought-provoking conversations with important global voices, commencing with the Pulitzer Prize-winning author and former U.S. ambassador to the United Nations on September 14.

Who gets a hearing and who gets shown the door is an Irish national obsession, and in Expanding the Canon on September 28, Fiona Coleman and Elizabeth Mannion will draw on their respective publications, Political Acts: Women in Northern Irish Theatre and The Urban Plays of the Early Abbey Theatre to discuss how gender, civil rights, and the rural-urban contrast have played out on the Irish stage and in academia, from the founding of Dublin’s Abbey Theatre to the brink of Brexit. You won’t want to miss this one.

On September 21 the award-winning novelist Sebastian Barry, who ranks number one on The Guardian’s list of top ten writers to see live, comes to the IAC to read from the best new Irish novel of 2017, Days Without End. The two-time shortlisted Man Booker Prize author will be joined in conversation with Sabina Murray, author of Valiant Gentleman.

Comedy nights have been a feature at the IAC for years, in an ongoing once-a-month evening of standup and music titled Sundays at Seven. Selected by Fiona Walsh and Ann Design, the night features stars on the rise and moonlighting industry professionals. Banner names can mix it up with first timers here in a way that’s unlike any other comedy night in town.

Perhaps the show with the biggest buzz of all will be Riot, the winner of Best Production at the 2016 Dublin Fringe Festival. Described as a disorderly cocktail of theater, gut-punching spoken word, banging jigs, slapstick comedy and eye-popping circus acts, it’s both party and politic, a love letter of hope to the future, and a clarion call on the state of the nation and a celebration of Ireland.

Riot will also include the Queen of Ireland, Panti Bliss, our national treasure in the role she was born to play, sovereign over all. The show will perform February 15 through 17 and you are advised to book your tickets early (they’re going to sell out).

The IAC will also host its annual fundraiser, the Spirit of Ireland gala, at Cipriani 42nd Street on Friday, October 13. This year’s honorees are Steve Martin, Paul Muldoon and Sharon Patrick.

For a full list of shows and times visit irishartscenter.org.