“People were so, so grateful. We saw houses reduced to shacks. Rubble all over the place. Our donations were gratefully accepted.” 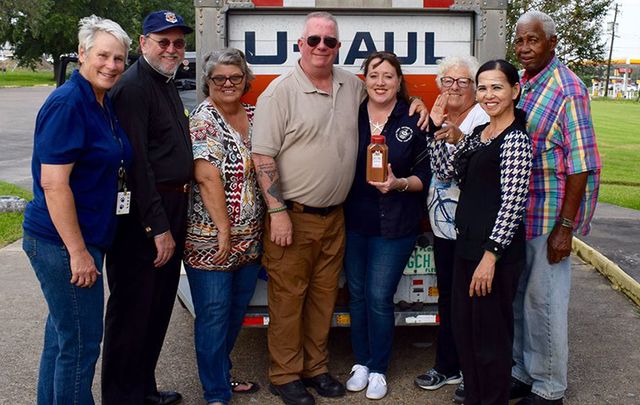 Ed Shevlin (center) and Leslie Mahoney (third from right) with locals in Port Arthur who accepted their donations.

The journey to Port Arthur, just outside of Houston, began on September 11 at around 4 p.m. for Rockaway Irish Americans Ed Shevlin and Leslie Mahoney, who drove a Chevy truck and attached U-Haul trailer full of supplies to help people devastated by the impact of Hurricane Harvey last month.

Four days and more than 3,000 miles later they were back in New York and planning their next visit to the stricken location, poorer than most in the Houston vicinity and hugely grateful for the outpouring of support from New York.

“It was an incredible experience,” Shevlin, a Gaelic speaker and Irish scholar born and raised in Rockaway, told the Irish Voice.

“It was interesting driving through side streets in Brooklyn and other places with our truck and trailer, but we kept going and we made it.”

Mahoney, a retired schoolteacher, and Shevlin, retired from the New York Sanitation Department, knew the pain the people in Houston were feeling after Harvey; the Rockaways were similarly shattered by Superstorm Sandy in 2012.  They set about collecting donations of items like paper towels, bug spray and diapers for Houstonians and loaded up Shevlin’s truck and donated U-Haul to capacity.

They kept going for two days and landed in Port Arthur, a coastal city about 90 miles from Houston and badly in need of assistance after Harvey cut a destructive path.

“It looked just like Rockaway after Sandy.  The only thing missing was the sand because there was no beach nearby.  Houses flooded, possessions piled up all over the place. It was awful,” said Shevlin.

“It seemed to be an area that wasn’t very affluent to start with. They are suffering so much.”

Volunteers help with clean up after Texas hurricanes.

Shevlin and Mahoney made their stop at St. Catherine of Siena School. Their original plan was to head to Houston proper, but the impact of their supplies would be more profoundly felt in Port Arthur.

“People were so, so grateful.  We saw houses reduced to shacks. Rubble all over the place. Our donations were gratefully accepted.”

Shevlin and Mahoney remained in Port Arthur for a grand total of about 90 minutes, before heading back home to New York via Baton Rouge, where they spent the night.  Their epic drive ended on Friday evening, 96 hours after they started.

Mahoney discovered that the children of St. Catherine of Siena are in need of uniforms.  Shevlin says she’s started another collection drive in the Rockaways to help the children, and that another trip to Port Arthur will likely be on the cards.

“Leslie will likely fill up her living room again with donations, like she just did,” Shevlin said.  “So the likelihood is that we’ll go again, and happily so. It’s important for the people in Port Arthur to know that they are not alone, just like we weren’t alone after Sandy.”