It's time for the angry St. Patrick’s Day Parade and Celebration Committee to calm down and answer some questions. 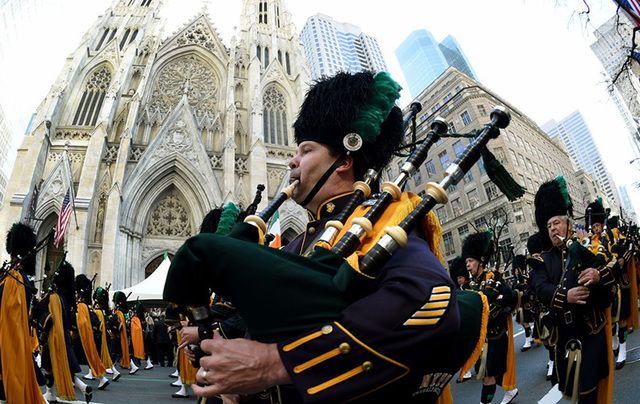 It's time for the angry St. Patrick’s Day Parade and Celebration Committee to calm down and answer some questions.

We have an interesting letter to the editor in this week’s Irish Voice courtesy of the St. Patrick’s Day Parade and Celebration Committee, which is under the Board of Directors of the New York City St. Patrick’s Day parade.

The committee, for those who may not follow local parade politics, is angered that the board took over management of the parade in June of 2015, and claims that as a result, the 180 affiliated parade groups it represents don’t have a say in how the parade is run.

The committee also alleges that the board is acting illegally in restructuring bylaws, appointing new members and pushing the affiliates to one side by not letting the committee members run the show.

It’s nothing new for supporters of the committee to bash the board leadership – they’ve done so before in their meetings and on their Facebook page – but this week’s letter contains a doozy of an insult, comparing the board’s offer of a compromise proposal to “a historic travesty that remains a concern for all Irish Americans: the six counties of Northern Ireland being divided from Ireland’s 32,” with an exclamation point for emphasis.

If that wasn’t enough of a slap, the letter also states that the board should know that its “divide and conquer” tactics are akin to the “Sassenach (English) oppressor of Ireland, and by the Know Nothing Nativists in Irish American communities.”

Are the members of the committee losing their grip on reality?  It’s safe to say that Irish Catholics in Northern Ireland wouldn’t agree that their struggle in any way equates with the squabbling going on in the New York parade, or should even be mentioned in the same sentence.

Ditto the Sassenach and the Know Nothing slur.  The Irish have experienced more than their fair share of discrimination and tyranny.  The current parade in-fighting doesn’t cut it as a major historical horror – unless, of course, the committee was acknowledging the years of fierce opposition to an Irish gay group taking part in the march, an absence that was finally rectified for the 2016 parade thanks to the board leadership under current chairman Dr. John Lahey.

The letter was signed by Denis McCarthy, a past president of the Cork Association who has rightfully advocated against the use of spray tans by young Irish dancers and involved himself in other worthy issues.  No doubt Mr. McCarthy had plenty of input from his fellow committee members in drafting the letter, but really, it’s time for all of them to calm down and answer some questions.

Namely: is the parade itself being mismanaged under the leadership of the board, and if so, exactly how?  What would the aggrieved affiliates do differently?  Have the recent grand marshals not met their standards? How have their interests not been represented come March 17?  And how would Fifth Avenue look on St. Patrick’s Day if they had their way?

The fact is, all of the usual groups marched in 2016 and more than 350 units – a record number – will take to Fifth Avenue next month, which doesn’t signify a parade riven with dissention akin to British occupation of the North.

Here’s another fact – when the board voted to install Lahey as chairman with responsibility for managing the parade at that June 2015 meeting, the parade had come off another year of political boycotts because an Irish gay group was not included in the line of march.  John Dunleavy, the former chairman of the Parade and Celebration Committee, was a staunch opponent of gay inclusion.  His uncompromising stance hurt the parade commercially and from a public relations standpoint.

Those living in the real world knew the ban had to end and they took steps to do just that last year with the welcoming of the Lavender and Green Alliance.  The boycotts and pickets stopped, the sponsors and politicians returned, the sun shone and Fifth Avenue didn’t cave in.

Does the current committee leadership agree with the board’s decision to include Lavender and Green in the parade?  Would they have taken the same step?

The board has done a great job managing the parade, but if the committee thinks it can do better, it’s time for its members to stop ranting and offer us a detailed blueprint as to exactly how they envisage Fifth Avenue on March 17.

Here is the letter in full:

In response to the article “Parade Board Continues Its Reforms,” (February 8-14), I would like to fill in some of the blanks the Parade Board leadership left out of their response.

Again, Chairman John Lahey has refused to honor his word and commitment to the elected officers of the St. Patrick’s Day Parade and Celebration Committee and to all 180 affiliate organizations who are the very heart and soul of the New York City St. Patrick’s Day parade.

Most recently at the January 31 board meeting of affiliate organizations, when Lahey was questioned about his commitment he claimed that he and the board “have worked with the elected officers of the Parade and Celebration Committee.” I was terribly disappointed by this inaccurate and misleading statement, which insulted the integrity of the delegates in attendance and many within the Irish American community who know this to be factually untrue.

The parade board leadership had also promised the Irish American community that they would not make any changes to the parade bylaws without input from the affiliated organizations, to be commenced post-lawsuit. To the contrary, the board’s leadership has continued their zealous revision of the Parade bylaws to further expand “the authority and responsibility of the Board of Directors.”

Furthermore, the board continues its vision of marginalizing input from any affiliated organizations and the officers that were elected as previously recognized by Lahey.

These actions also contradict Lahey’s letter of April 25, 2016, to all parade affiliated organizations, which stated:

The parade board leadership has failed to follow through on the promises that were made publicly 14 months ago and in writing nine-plus months ago to the affiliated organizations regarding this year’s parade. Instead Lahey and company have chosen to implement “stall and delay” and “divide and conquer” tactics to force their alternative proposal.

The Irish are all too familiar with such tactics, as our history reveals the same tactics were employed by the Sassenach oppressor of Ireland, and by the Know Nothing Nativists in Irish American communities, providing the incubus and foundation for our beloved parade.

The parade board’s alternative proposal would eliminate the current parade bylaw structure of seven officers that are elected biennially by all 180 affiliates. The board would like to reduce the affiliate representation to a mere four rotating seats of umbrella organizations that would further reduce representation to only two-thirds of all affiliate organizations; representing only 120 out of 180.

This alternative is not a shared governance structure acceptable to all 180 affiliated organizations, and contradicts the parade’s foundation and historic grassroots structure. This proposal also resembles too closely a historic travesty that remains a concern for all Irish Americans; the six counties of Northern Ireland being divided from Ireland’s 32!

The New York City St. Patrick’s Day Parade is a legacy and tradition inherited and owned by all 180 affiliated organizations! It is time we act as proper stewards of the parade and provide the leadership necessary to unite the Irish American community, where Chairman Lahey, Chairman Tully, the Board of Directors and the officers of the Parade and Celebration Committee work together with input from all the affiliated organizations.