Music in NYC is a family affair, especially on St. Patrick’s Day 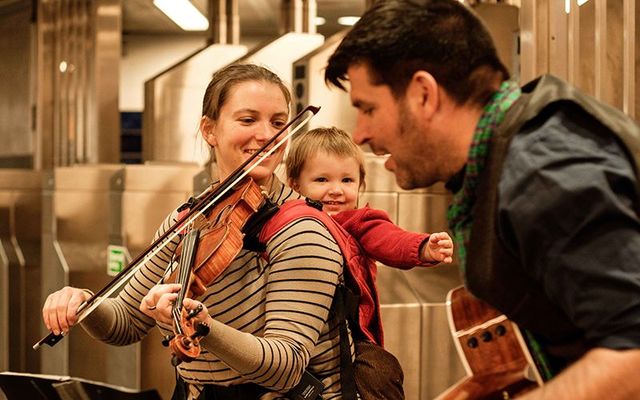 Sure, you might hear a terrible singer who’s had a bit too much to drink by, say, 10 a.m. Or you might take a sneaker in the face from a talented dancer who doesn’t realize there simply isn’t much room in a subway car. Overall, though, the quality of public performers in New York is generally very high.

For a while, a few years back, I took the L train into and out of Bedford Avenue in Williamsburg and -- as annoying as that hipster haven can be -- you could have set up a professional recording studio in that subway stop, so good were the singers, guitarists, and saxophonists who performed there. This time of year, of course, you might be lucky enough to hear the distinct strains of a fiddle or whine of uilleann pipes.  Which brings me to one of my favorite musical memories ever.  It was in the St. George Ferry Terminal on Staten Island.

Despite Staten Island’s terrible reputation -- reinforced yet again a couple of weekends ago when the borough’s St. Patrick’s Day parade decided to remain stuck in the middle ages and ban gays and lesbians from marching -- there’s often some good music on both sides of the ferry ride.  I would know because I’ve been taking that boat on a daily basis for the better part of the last two decades. And so, as St. Patrick’s Day approached one year I heard the sounds of Irish folk tunes in the ferry terminal.  All the better as it reminds the heavily-Italian population of Staten Island that there’s also quite a few Irish folk there. But then I saw the folks making the music!  The Poor Cousins, they were called.  A duo.  But not quite.

They were also a trio.  Singer and fiddler Naomi Morse had a little baby strapped to her back as she played. “Bringing the baby busking seemed like the most natural thing to do,” Naomi told me.  “We feel very lucky to be able to share the experience with him, and that our line of work means we can spend more time with him, even if it makes the work harder.” What could possibly be difficult about expertly playing Irish traditional music alongside her husband, Dublin-born guitarist and singer Emmet McGowan, with baby Ronan strapped to your back? “As anyone with kids knows, it's a moving target. Every month he's a bit different,” Naomi says.

“We come with lots of snacks, some books, his instruments, a carrier for when he gets sleepy, but sometimes he's just too tired or grumpy or not in the mood. There have been a couple of occasions -- thankfully not too many to date -- when he has simply decided ‘Nah, not today. I'm not going to cooperate.’ When this happens we pack up and go home.”

She added, “When it comes to busking it works because we can stop anytime we need to.  His routine has changed over the few years; at this point, he'll usually start out the session ‘playing along’ with us on his little guitar, fiddle or harmonica then eventually, hopefully, he'll get up on Mama's back and have a snooze for the second half.”

Naomi and Emmet have been playing together for over a decade now.  Emmet grew up in Ireland, then spent time in Germany when he was in his 20s.

In 2006, he went to England where he met Naomi, a Vermont native who grew up steeped in New England’s traditional music scene. The Poor Cousins can be seen regularly around New York City -- at Grand Central Station, Fulton Center, and both Staten Island Ferry terminals.

“The warm response and encouragement has always been lovely. We're blessed to experience such a positive side of New York. It gives one hope in these stormy times,” says Naomi. On St. Patrick's Day this year they’ll be at Pete's Tavern in Bronxville, as well as the Belle Harbor Yacht Club in the Rockaways. Now that Ronan is a little older, Emmet and Naomi have been performing more and more as a duo rather than trio.  Still, sometimes it’s best if Ronan is around