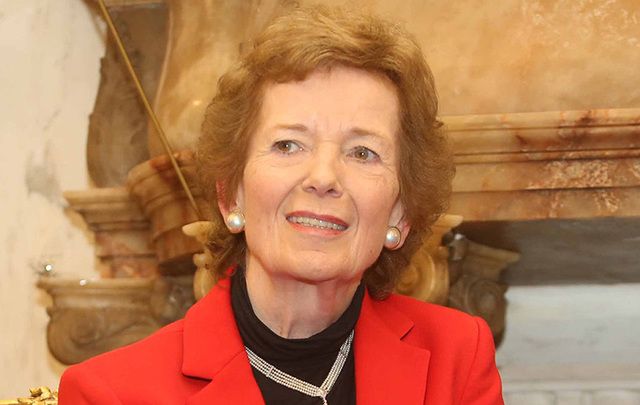 Robinson, 72, was President of Ireland from December 3, 1990, to September 12, 1997 – ending her term almost three months before seven-year term was complete.

Robinson told RTE’s "Morning Ireland" radio program that it was a difficult decision not to complete her first term and run for a second seven years in office.

She said former UN Secretary General Kofi Annan had “bullied” her into an early end to her presidential career to become UN High Commissioner for Human Rights.

“I did want to be High Commissioner for Human Rights when I decided to step down.  I then made the mistake, and that was a mistake, of allowing Kofi Annan to, sort of, bully me into coming earlier and not seeing out the last month-and-a-half, or whatever it was, of my presidency,” Robinson said.

It wasn’t true that she didn’t like being president, she added.

“It was the hardest decision not to go for a second term. I knew myself that it would be very difficult to do it with the same utter 100 percent conviction for a whole seven years. I could do it for three or four and then the repetition would begin to be too much,” she added.

Before Robinson became the first woman to hold the presidency, the office had a reputation as being little more than a retirement position for prominent politicians. She breathed new life into the role.

She also changed the face of Anglo-Irish relations when she was the first serving Irish president to visit Britain and meet Queen Elizabeth II at Buckingham Palace.

She was UN commissioner for five years until 2002.  She now leads the Mary Robinson Foundation – Climate Justice, a center highlighting global justice for vulnerable people impacted by climate change across the world.