Learning from Turlough McConnell’s Dagger John at the Sheen Center

Review of The Wars of Dagger John, by Turlough McConnell. 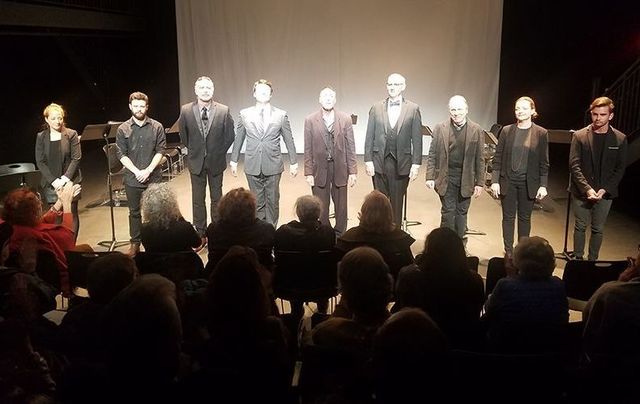 On Thursday night, November 16, the Sheen Center hosted a stage reading of  The Wars of Dagger John, a new play written by Turlough McConnell and directed by George Heslin, which will be developed for production in 2018.

The play, commissioned by the Sheen Center, explores themes of race and moral ambiguity in the context of the Civil War as it affected New York’s Irish community.  New York’s first archbishop, “Dagger” John Hughes, must exert leadership during a difficult period of urban unrest.

An impoverished immigrant from Ulster, Hughes rose to prominence in the post-Famine years and became one of America’s most powerful religious and civic leaders by the outbreak of the Civil War.

“He raised up thousands of refugees in New York at the height of Ireland’s Great Hunger years (1845-1850) only to be challenged by their success nearly twenty years  later, at the height of the American Civil War (1861-‘64)."

McConnell’s play focuses on the latter years of the archbishop’s life, when a physically and mentally drained Hughes struggles to find the courage to take a principled stand that threatens his influence over his Irish American faithful. Torn by loyalty to the immigrant Irish, Hughes wrestles with larger issues of national unity.  These were the very debates that divided America and climaxed in the New York City Draft Riots, four days that are still considered the worst period of civic unrest in American history.

One of the challenges of period drama is achieving equilibrium between the events of the time and a compelling narrative. The Wars of Dagger John strikes this balance gracefully; it tells the story of a conflicted iconic figure and re-creates the political tensions and changing dynamics of the urban landscape of the time.

The play presents substantial historical background, including the sources of the mounting discontent within the Irish community towards President Lincoln and the Union cause. It grapples with the complex issues of anti-Irish sentiment from American nativists, Irish attitudes towards slavery and African Americans more generally, and the Irish-fueled emergence of the political machine Tammany Hall -- combustive forces that culminate in the Draft Riots, which take place on stage.

That the play can pull off this feat is testament to the characters and the witty and entertaining dialogue, which does not temper the poignancy and weightiness of the issues at hand. Hughes’ boundless devotion to his flock and his uncompromising nature are highlighted throughout.  He is surrounded by captivating allies, including his sister Mother Angela Hughes, U.S. Secretary of State William Seward and publisher Horace Greeley, and opposed by bold adversaries, Tammany Hall Boss Tweed and Irish activist John Mitchel.

The true beauty of the play is its respect for the social forces at work. Hughes is depicted in the context of national and local politics and media, which interact with his Irish Catholic heritage. The multi-layered portrayal, brought to life by the excellent cast of skilled actors, does true justice to Hughes as a man and a leader confronting the need to do the right thing, despite the potential for dire consequences.

McConnell acknowledges the contribution of everyone involved in the production. "My sincere thanks to the actors, who were so brilliant onstage, and those tireless, skilled craftspeople behind the scenes, especially director George Heslin and the dramaturgs Bryan Delaney and Emily Snyder.”

The play ends powerfully with a rendition of the iconic Irish air, “The Minstrel Boy,” which reminds the audience, who had been treated to some time travel throughout the evening, of the modern-day relevance of the story.

As the closing monologue of the play asserts, this is not just the story of one man of one community but a quintessentially American narrative that resonates today as “Americans continue to struggle with issues of race and freedom.”

The leaders of the past have much to offer us today.