Could a Trump US Irish visa deal really be on the cards? 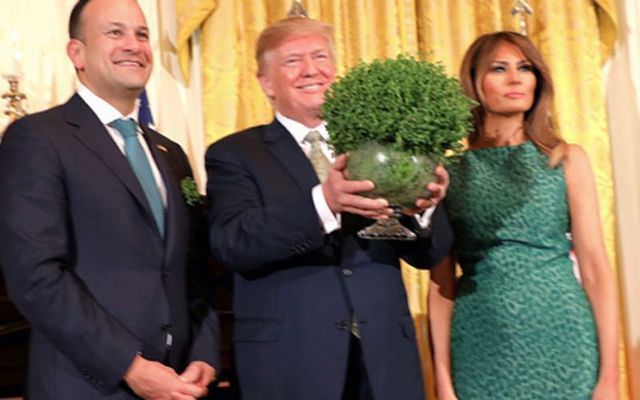 The discussion between Taoiseach Leo Varadkar and President Donald Trump at the White House last Thursday went beyond the usual chit-chat and mutual bonhomie in one important aspect.

Varadkar and his special envoy for the undocumented John Deasy put forward a new plan for an immigration deal that would allow equal or possibly more numbers of Americans to live in Ireland as Irish who want to legalize in America.  They pegged the number of Irish undocumented in the U.S. in the 10,000 or so range.

It was clearly a reciprocal initiative, one that could well catch the attention of Trump who is always insistent that America get equal consideration in any deals agreed.

The initiative was the brainchild of Deasy, a member of the Irish Dail who has been serving as a Irish envoy to the U.S. on the undocumented and has made many trips to Washington, D.C. to work on the issue since his appointment last year.

Deasy’s presence in the White House and the Oval Office with Varadkar was a clear indication of how important the Irish leader was taking the issue.

That is good news and Trump certainly did not flinch, although his mercurial ability to change his mind in the blink of an eye makes any commitment dubious.

On the other hand, his base is heavily consisting of white Catholic ethics in states such as Pennsylvania and Ohio which are critical to his 2020 prospects. Trump has made it clear more than once that he relishes the Irish engagement on March 17.

Looking forward to first meeting of the day with @realDonaldTrump. Just time for a quick coffee with @DanMulhall #stpatricksday pic.twitter.com/mVuLygmyXl

Varadkar sounded reasonably optimistic. “There isn’t a solution on the table as yet but there is a real willingness from the U.S. administration to perhaps come to some sort of reciprocal agreement with Ireland recognizing that the Irish who are undocumented in America are a particular group, they are relatively small numbered, maybe 10 or 15 thousand people and they did almost all come here legally in the first place,” he said, adding that the Irish undocumented were contributing to the American economy.

Thanks to @SpeakerRyan for an excellent Friends of Ireland lunch on Capitol Hill. Real celebration of all things Irish for #stpatricksday pic.twitter.com/lElFyzTJkZ

Under the new plan, he said, “there could be some sort of reciprocal agreement whereby we could provide new benefits and new protections, visas and pathways to citizenship for Americans in Ireland in return to them doing something similar for the Irish here.”

It is dreadfully difficult for a American to relocate to Ireland, especially retirees who must show an income of $50,000 per year for each adult in order to remain legally.

Many Americans living in Ireland are deeply disappointed that the residency rules are so difficult.  That issue had not received anything like the publicity that the Irish undocumented problem has, but it is an intriguing concept to match them up as a joint initiative.

On the downside of course, there could well be opposition from other ethnic groups to any Irish initiative. However, the reality is that many countries, most recently Australia and Chile, have managed to do individual deals with the U.S. government on immigration.

The history of the undocumented Irish and efforts to help them stretches back to the early 1990s after the end of the Morrison visas.  There has been a lot of heartbreak and dashed hopes since then.

Yet it is encouraging to see the Irish government persevere. We can only hope for the best.

Read more: The “No Irish” pub was the best thing about St. Patrick’s Day 2018