Irish St. Pat’s for All Homecoming for Brendan Fay

Founder of the Lavender and Green Alliance and co-founder of the annual St. Pat’s for All parade in Queens heads home to leave Drogheda, County Louth parade. 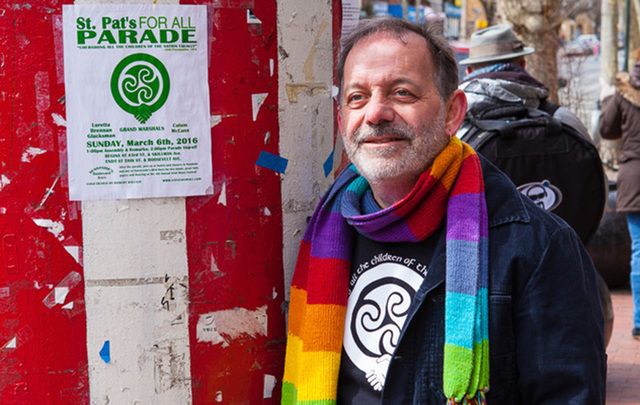 Brendan Fay at home in Queens.

Brendan Fay, founder of the Lavender and Green Alliance and co-founder of the annual St. Pat’s for All parade in Queens, spent years and years protesting his exclusion from the New York City St. Patrick’s Day parade, starting back in the days when the Irish Lesbian and Gay Organization (ILGO) existed.  He was even arrested while doing so, but always stood firm in his belief that an Irish gay group, with its own banner, should have a place alongside other groups representing Irish America on its biggest day.

But that was then and this is now.  Fay, who resides in Queens with his husband Tom Moulton, finally won his place on the Fifth Avenue line of march in 2016 for the first time with Lavender and Green, which will also take part in Friday’s parade “this year and every year,” Fay says.

But one person will be missing from holding the group’s banner this year – Fay himself.  The native of Co. Louth has a good reason: he headed home on Monday night to prepare to lead his hometown parade in Drogheda as grand marshal on St. Patrick’s Day.

Could Fay have ever foreseen the day, back when he was protesting, that he’d become so much a part of the mainstream?  “I had always hoped that one day things would be different for us,” he told the Irish Voice on Monday from JFK Airport, having switched flights to make it back to Ireland before Tuesday’s snowstorm.

Missing his first St. Patrick’s Day in New York will feel different for Fay, but the chance to lead the march in Drogheda supported by all of his family members who still reside there was an opportunity not to be passed up.

“There has been a sea change in the New York parade,” Fay says.  “And I have come to really appreciate the significance of the parade. I was very proud to march with Lavender and Green with all of our supporters. It sent a message that there’s a new Ireland, a new Irish America, and I’m thankful.  Lavender and Green is looking forward to everyone turning out to march this year too.”

Fay will spend his week in Ireland speaking to youth groups in Louth and Dublin and doing research work on an upcoming film that he’s making.  One of his engagements will be with Senator David Norris, Ireland’s best-known gay rights activist.

“It’s going to be very emotionally moving for me to be back in the town where I was raised, leading the St. Patrick’s Day parade,” said Fay.  “And I’ll be thinking of all our friends in New York who helped make the day possible, like Stanley and Kathleen Rygor, and Kathleen Walsh D’Arcy, Danny Dromm and Tarlach Mac Niallais and so many more.”

In a press release, Fay further stated that leading the Drogheda parade “is a huge recognition of the movement to make our Irish parades and celebrations more welcoming” and a “historical acknowledgment of the hopes and efforts by LGBT immigrants seeking our place in the New York Irish diaspora.

“At the heart of Lavender and Green Alliance and St. Pats for All is a movement to create cultural spaces welcoming and hospitable to our Irish LGBT stories and lives,” said Fay. “St. Patrick’s Parades can be warm and vital expressions of community life where the cultural heart bursts open onto the streets in every Irish town.”

Fay will be accompanied in Drogheda by Moulton and his Irish-based family, including siblings Peter, Mary, Carmel, Bernadette, and Joan Lorraine.