Owen McConnell developed stage-four lung cancer most likely as a result of his work in the recovery and restoration efforts after 9/11. 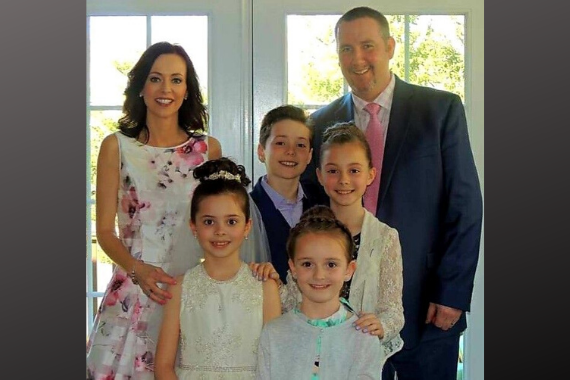 Meitheal (pronounced meh-hull) is the Irish word for a team of workers, usually neighbors, who historically banded together to help a neighbor in need, especially in farming work such as saving crops, plowing fields, cutting turf or some emergency.

The rules of the meitheal are clear.  It may be your home and family this time that needs the help, but you will also contribute to another needy neighbor if called on at a later time.

Perhaps you remember the scene from the movie "Witness" where an Amish village gets together to construct a new barn for a stricken family with men, women and children all helping in the rebuild.  If so, you get the idea.

The soul of the concept is community unity through cooperation.  It’s a historical and necessary part of Irish rural life.

But meitheal is not just confined to farm work. In Yonkers and the North Bronx last weekend, an Irish meitheal occurred which showed the Irish spirit and love of neighbor in need has truly crossed the Atlantic.

The bad weather did not dampen the scale of the meitheal as dozens of entertainers, eleven pubs and hundreds of locals braved the elements to help a stricken family.

Starting with a healing mass at 11 am, an all-day jamboree of the best of Irish entertainment in New York took place.

The fact that eleven pubs/restaurants threw open their doors and so many performers provided free entertainment was a remarkable testament to the man and his family who were being fundraised for.

Owen McConnell, a carpenter and small construction company owner by trade, developed stage-four lung cancer most likely as a result of his work in the recovery and restoration efforts after 9/11.

McConnell is a Donegal man, born in the U.S. but raised back home when his family moved back when he was young.

He returned to the U.S. with his wife-to-be Joanne and soon immersed himself in the local Woodlawn-Yonkers Irish community, the last beachhead of Irish-born in New York.  The McConnells have four children.

After 9/11 McConnell felt compelled to help and worked as a volunteer on the pile with no idea of the harmful toxins he was breathing in.

The lung cancer came as a great shock as McConnell was a nonsmoker, fit as a fiddle, a hard-working man.

“Owen is an incredible person. His diagnosis hasn't gotten him down and the only time I've seen him get emotional is when talking about the fundraiser and all the people who want to help,” said one of the meitheal organizers, Karl Campbell, talking to the Irish Voice before the event.

A day-long meitheal is what transpired and it was a huge success, bad weather aside.

As always in these situations, the giving back helps those who are giving every bit as much as those who receive.

In an era where neighborliness is fading and everyone seems more and more locked into their own cocoon, an outbreak of community action can be a powerful antidote to the current isolation that so many people practice.  The Irish of old had to depend on each other as there was no other help forthcoming.

Writer Denise Hall described the meitheal impact in an article in the Irish Examiner.

“In such transactions, money did not change hands, but there was the pleasure of a job well done, companionship, a decent meal, and perhaps something to quell the thirst at the day’s end. Such encounters not only solved many a practical problem, but also built strong and enduring ties in a community,” she wrote.

The Irish meitheal tradition is alive and well 3,000 miles from home as the Owen McConnell day shows. For that we should all be grateful.

You can donate by going to the McConnell Family Fundraiser on Facebook.